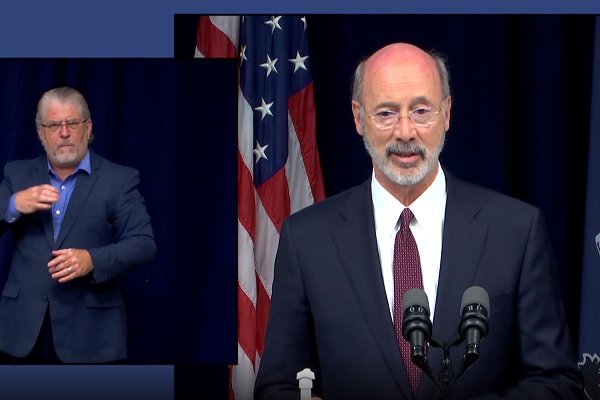 Harrisburg, PA – After meeting with leaders in Philadelphia and Harrisburg, Governor Tom Wolf announced several actions to improve law enforcement relations with the community and strengthen training and accountability.

“Today, I am taking steps to address concerns about community relations with law enforcement as well as strengthen accountability of our agencies,” Gov. Wolf said. “This effort will commence immediately.”

Gov. Wolf outlined multiple actions directed at meaningful reforms, many based on the 21st Century Policing Task Force, created in 2015 under President Obama in response to the Ferguson, Mo., death of black teen Michael Brown that set off weeks of protests.

Highlights of the recommendations include:

• Creation of a Deputy Inspector General within the Pennsylvania Office of State Inspector General (OSIG) focused on deterring, detecting, preventing and eradicating fraud, waste, misconduct and abuse amongst law enforcement agencies under the Governor’s jurisdiction.

• Creation of a Pennsylvania State Law Enforcement Advisory Commission that reviews allegations of misconduct by law enforcement personnel under the governor’s jurisdiction.

• Providing technical assistance to municipalities from the Pennsylvania Commission on Crime and Delinquency (PCCD) to encourage the creation of local citizen advisory boards.

• Creation of a Racial and Ethnic Disparities Subcommittee under the Criminal Justice Advisory Committee (CJAC) at PCCD.

• Reviewing Training and Education of Officers. All training academies for law enforcement must review current use of force training standards for law enforcement and form a workgroup to develop model training standards to ensure that all officers receive the best instruction in their interactions with the public. Departments should be striving to obtain state and or national accreditation. Accreditation is a key component in assisting departments in evaluation and improvement of their standards and practices.

• Supporting Legislative Reforms. The governor will work with the legislature on reforms, including legislation proposed that provides for improved access to police videos, an oversight board for officer training and continuing education, a special prosecutor in deadly force cases, interdepartmental law enforcement hiring reform and PTSD evaluation for police officers.

Earlier this week, members of the Police Reform Working Group, which includes state and local elected officials, the chief defender of the Defender Association of Philadelphia, as well as several attorneys, put forward proposals to address growing frustration with racism, oppression and rooting out law enforcement misconduct.

“We’ve addressed criminal justice reform on a bipartisan basis, and that’s what we’ll need to fix these longstanding inequities,” Gov. Wolf said. “And as we go forward, we need to address the looming, systemic failings that have created this situation.”

The governor also committed to addressing longstanding inequalities against people of color.

“I’m going to continue to fight for more education funding and for help for minority-owned businesses. These fights do not have an end point, and we won’t know when we’ve won, but we have to keep going to make our commonwealth fairer and more equal for everyone.”