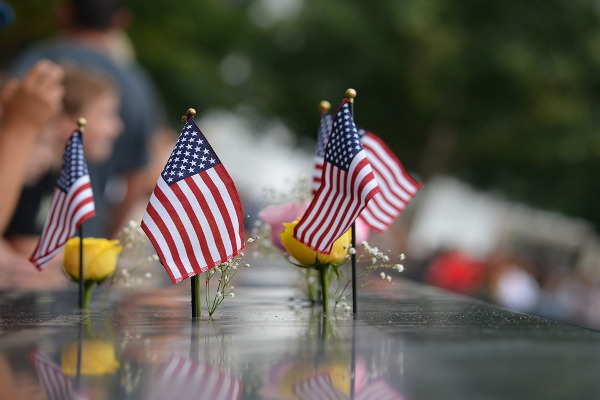 New York (AP) — Americans are commemorating 9/11 with tributes that have been altered by coronavirus precautions and woven into the presidential campaign, drawing President Donald Trump and Democratic challenger Joe Biden to pay respects at the same memorial without crossing paths.

In New York, a dispute over coronavirus-safety precautions is leading to separate remembrances at the Sept. 11 memorial plaza and on a nearby corner.

Trump and Biden are both headed — at different times — to the Flight 93 National Memorial in Pennsylvania.

Biden also plans to attend the observance at the 9/11 memorial in New York.

Vice President Mike Pence is also due at ground zero — and at the alternate ceremony nearby.

Today, please do at least one good deed for someone else. For example: write a thank you note to a veteran or first responder, drop treats off at the police or fire station, make a donation to a cause that’s close to your heart, call a resident of a nursing home to chat, or even just smile at a stranger.

8:42–8:46 (approx.): Flight 175 is hijacked above northwest New Jersey, about 60 miles northwest of New York City, continuing southwest briefly before turning back to the northeast.

8:46:40: Flight 11 crashes into the north face of the North Tower (1 WTC) of the World Trade Center, between floors 93 and 99. The aircraft enters the tower intact.

9:02:57: Flight 175 crashes into the south face of the South Tower (2 WTC) of the World Trade Center, between floors 77 and 85. Parts of the plane, including the starboard engine, leave the building from its east and north sides, falling to the ground six blocks away.

9:28: Flight 93 is hijacked above northern Ohio, turning to the southeast.

9:37:46: Flight 77 crashes into the western side of The Pentagon and starts a violent fire.

9:45: United States airspace is shut down.

10:03:11: Flight 93 is crashed by its hijackers as a result of fighting in the cockpit 80 miles (129 km) southeast of Pittsburgh in Somerset County, Pennsylvania. Later reports indicate that passengers had learned about the World Trade Center and Pentagon crashes and were resisting the hijackers. The 9/11 Commission believed that Flight 93’s target was either the United States Capitol building or the White House in Washington, D.C.

10:28:22: The North Tower of the World Trade Center collapses, 1 hour and 42 minutes after the impact of Flight 11. The Marriott Hotel, located at the base of the two towers, is also destroyed.

Clearfield County bridge to be dedicated in honor of PennDOT worker