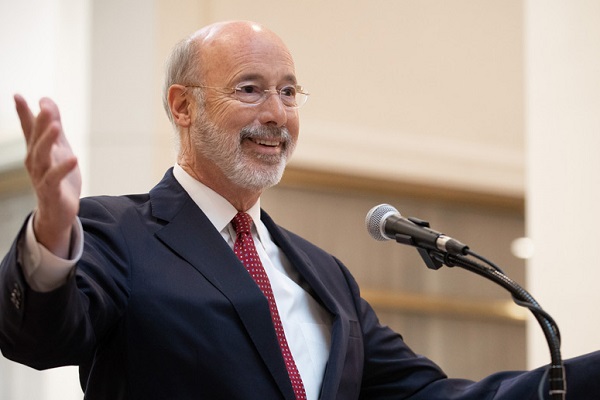 Harrisburg, PA – 49 state employees were honored yesterday with the Governor’s Awards for Excellence, showing bravery, innovation, persistence, and dedication to the residents of our state.

This includes four PA State Police troopers, a couple employees from PennDOT centers, workers from the unemployment office who helped with online live chat help options, a department of corrections official who expanded virtual reality technology to help juvenile offenders to reenter society after lengthy sentences, and an agricultural employee who helped unused perishable food get used by non-profits who were providing food resources to hungry Pennsylvanians.

Harrisburg, PA – Governor Tom Wolf praised the recipients of the Governor’s Awards for Excellence for 2019 and thanked all state employees for their dedication to public service.

“Today, we are recognizing the extraordinary accomplishments of commonwealth employees in service to their fellow Pennsylvanians,” said Governor Wolf. “They have demonstrated innovation, work ethic, self-sacrifice, and compassion for others at the highest levels. The positive impacts of their efforts will be felt for many years to come.”

“The Governor’s Awards for Excellence celebrate the best among us as state employees,” said Secretary of Administration Michael Newsome. “I want to congratulate all of our nominees for their exceptional contributions.”

Twenty-one state agencies submitted a total of 124 nominations prepared by their employees, with five individual and six group nominations selected as winners for this year’s awards.

Corporal Adam Kirk – Pennsylvania State Police
For extraordinary bravery and sacrifice in the line of duty. Corporal Kirk was shot in the chest while conducting a welfare check at a residence in Tioga County in December 2019. Despite being severely wounded, Corporal Kirk and two Troopers maintained a perimeter outside the residence until back up and medical assistance arrived, preventing the assailant from fleeing and possibly harming others.

For conceiving and developing new tactics to combat the opioid crisis and keep illegal guns and weapons out of communities. By proactively cultivating investigative leads and building relationships with other law enforcement agencies, the team has been instrumental in multiple homicide investigations, fugitive apprehensions, and heroin/fentanyl seizures.

After a fire destroyed their offices and maintenance garage, the team mobilized to quickly resume operations from alternate locations and plan for the construction of a new facility, all while continuing to serve the traveling public.

Sarah Baker – PennDOT
For leading the effort to make REAL ID-compliant driver licenses and photo ID cards available to Pennsylvanians. She made sure PennDOT’s program complied with applicable laws and regulations, coordinated the construction of five new driver’s license centers, contributed to the design of IT infrastructure to support the program, and conducted extensive research to provide an optimal customer experience.

For leading the largest phase of implementation of Community HealthChoices, a program for older Pennsylvanians and individuals with physical disabilities. Their carefully planned coordination and communication with participants, stakeholders, advocates, local officials, and managed care organizations, as well as health care, home care, and long-term care providers, resulted in a successful roll out with no disruptions in care or services.

For establishing the Patient Advocacy Program within the Prescription Drug Monitoring Program to assist patients who lose access to care due to the arrest of a provider, surrender of a DEA license, or closure of a clinic. They have provided rapid response for 11 events affecting large patient populations and direct outreach to over 1,060 individuals. They also disseminate alerts to counties when there is an unusually high numbers of drug overdoses.

Adam Overmiller – Department of Health
For developing an innovative geographic information system mapping tool that captures and shares data on the languages people speak. The tool can target communications tailored to populations that lack proficiency in English, allowing agencies to improve their outreach and achieve better outcomes for all Pennsylvanians.

For pioneering new strategies to restore habitats essential to the reversal of declining populations of Pennsylvania’s state bird, which has been devastated by the West Nile Virus. By identifying areas capable of supporting ruffed grouse that are also at low risk for the virus, the commission is better able to target its habitat restoration efforts where they are most likely to be successful.

Daniel McIntyre – Department of Corrections
For implementing multiple innovations in corrections, parole, and reentry. They include using virtual reality technology to help juvenile offenders reentering society after lengthy sentences, working with mentally ill and hospice inmates, and training staff. He also led the use of GPS for low-level drug offenders as an alternative to incarceration or community corrections centers (CCCs) and created job placement and transportation services for reentrants residing at CCCs.

Tyler Banas – Department of Agriculture
For stepping in to assist when a non-profit responsible for providing food access to 1.3 million low income Pennsylvanians in Southeastern Pennsylvania suddenly went out of business. Tyler helped the new provider get up to speed with its responsibilities as a distributor, as well as the proper handling of perishable items, all while fulfilling his regular job duties.