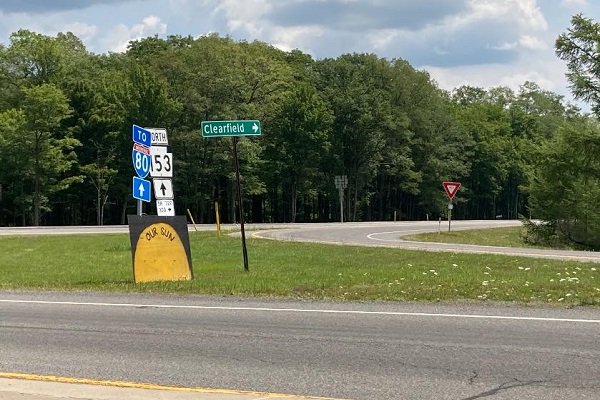 Rockton, PA – If you travel on Route 322 from Rockton into Clearfield, you’ve probably been wondering what’s up with the signs stuck along the median, indicating the planets in our solar system.

The sun starts at the intersection of Rockton Mountain Highway and Route 322 and ends all the way at the bottom of the mountain nearly to Clearfield with Pluto.

Sue Shaffner, who some might know as the recently retired first grade teacher, said she had a smaller version of the planet project on her own acreage first and decided that she wanted to share it with the world.

It’s not a permanent fixture… she plans on taking it down in September.

Sue says she wanted to give people a little surprise, something that they could smile about and learn from while they drove by.

It certainly made us smile!

Listen to the full interview with Sue Shaffner. 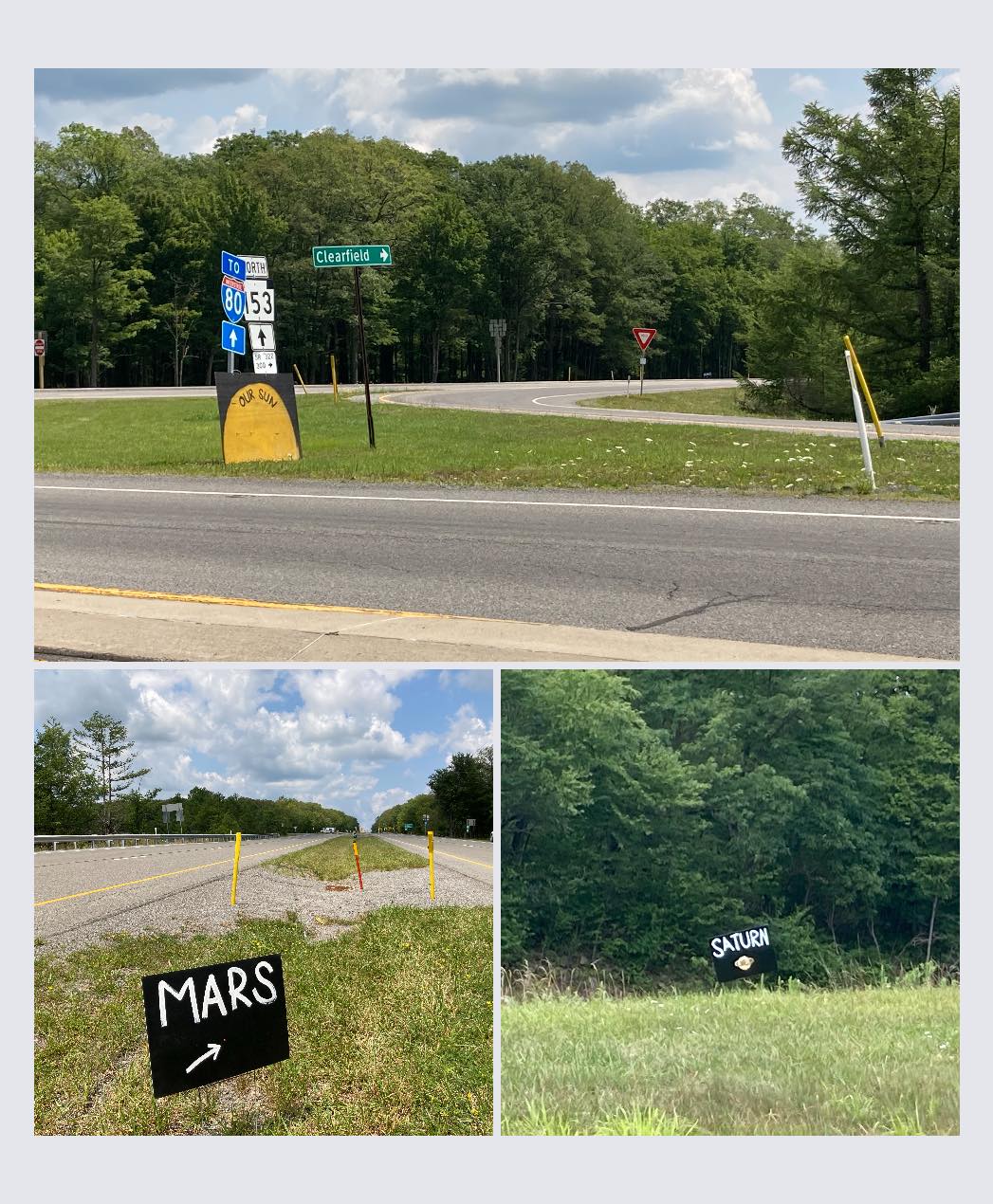 Over a year ago, I found a fascinating site
for modeling our solar system
that calculated the scale/sizes and distances of the planets
based on the size of the sun.
https://www.exploratorium.edu/ronh/solar_system/

Last summer I made a model across our acreage
based on a five-inch sun at the corner of the house.
The inner planets were on bricks in the yard,
the stone wall was the asteroid belt,
and the outer planets stretched from the orchard
out through the field.
Pluto, deprived of its planet status,
grinned from the Kuiper Belt near the property line.
Lucy learned the order of the outer planets
by flying over them on the four wheeler— fun!
The system was also useful for giving precise directions:
“I’ll be picking huckleberries near Neptune.”

As our friend Kevin says, though,
Sic semper optimus!
Bigger is always better!
What about a five FOOT sun!?!
Why five feet?
It was the perfect size
to have the solar system stretch along route 322
from the top of Rockton Mountain
to the edge of Clearfield in the Susquehanna Valley
four miles away.
My friend Paula donated her old election signs
and I spray painted them black,
then painted the planets to scale.
Well, almost.
It was hard to paint Mercury
with only a 0.2 inch diameter.

Last month, our visiting grandgirls helped spray paint the sun,
and last week I put the system up.
It was not as easy as I thought.
Signs are not easily pounded into the median’s gravel.
Also, I hadn’t learned how to transfer
decimal GPS coordinates from Google Maps;
instead I used the visual measurement system
on Google Earth—
you may come across the remains
of exploded brain cells around Jupiter.
And I hadn’t realized quite how steep and rocky
the downhill median is around Saturn.
Thankfully, only two vehicles glimpsed me
sliding down the rockface, ax in hand,
and neither of them called the police.
Yes, I could have placed the sign more easily
on the return trip up the mountain,
but my OCD required me to install them in order.

For those people (like me, ironically)
who aren’t thrilled with roadside signs,
you may feel better knowing that
this is a temporary science/art project.
I plan to take it down in mid-September
if it lasts that long.

Until then,
live long and prosper.

PS. And now, a shameless plug—
For more learning activities,
visit Overallschool.com
or Overall School on Facebook.
Thanks!