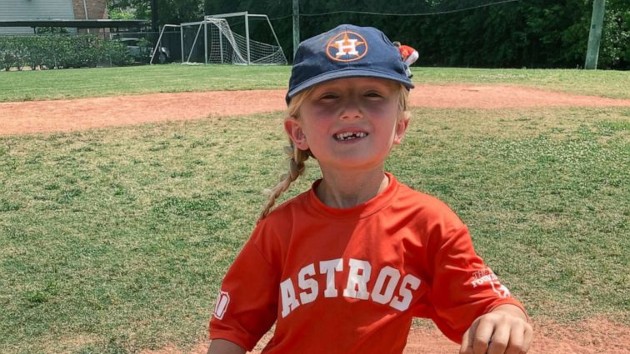 (NEW YORK) — Sunny Bryant, an 8-year-old transgender girl who lives in Texas, loves to play baseball and participate in gymnastics.

She’s also been “begging” to play soccer, according to her mother, Rebekah Bryant. But Sunny, who currently plays on co-ed teams, is aware that she might not be able to play on girls-only teams as she has in the past. Some lawmakers in her state have been trying to force her off of girls’ sports teams in the future and make her play with boys instead.

“It wouldn’t be fair,” she told ABC News in a recent interview.

Texas SB 29, which passed in the Senate, would have required public school students to compete on sports teams and in competition based on their sex assigned at birth. It was being considered in the state legislature but the House ran out of time in the legislative session to consider it.

“We know something like this is going to happen again … This doesn’t just immediately go away — this pain that we experienced during the session,” Rebekah Bryant said.

The measure was among what critics say are more than 250 anti-LGBTQ bills that have been introduced in state legislatures across the country, according to the Human Rights Campaign. Florida recently joined Alabama, Arkansas, Mississippi, Montana, Tennessee and West Virginia in signing anti-trans sports legislation, similar to the one proposed in Texas, into law.

One area of focus for the legislation — and a cultural flashpoint — has been youth sports and Texas is just one of more than 30 states that have introduced bills against the participation of trans youth in sports teams of their corresponding gender.

‘This is what’s going on’

In April, Rebekah Bryant testified against the legislation in front of the Committee on Public Education in the Texas House of Representatives. Before she took the trip to Austin to speak out in support of her daughter, she explained to Sunny what she was fighting for.

“I explained to her, ‘So, this is what’s going on,"” Bryant said she told her. “‘They want to stop you from playing sports, they want to not allow you to have puberty blockers, all those things. So I’m going to go try to convince them not to."”

In her testimony, she recounted Sunny’s story — saying her daughter has known that she was a girl since she was 4 years old. She told the lawmakers she’d imagined what it would be like for a 16-year-old Sunny to play on a team that doesn’t correspond with her gender identity.

“Long blonde hair, blue eyes, she’s a young woman, but she has to play on the boys’ soccer team,” she said. “She’ll be alone in the locker room, she won’t have a lot of the same interests as her teammates, and she may even be bullied and harassed by the players, opponents and parents.”

He did not respond to requests for comment from ABC News, but told NBC affiliate KCBD-TV “it’s just an effort to preserve the tradition, the history, and provide safe competition for women with their biological peer group.”

Annie Lieberman, the director of policy programs for Athlete Ally, an advocacy group that works for inclusive policies in sports, said that the wave of legislation will only worsen conditions for an already vulnerable community.

“It has been and continues to be an absolutely horrific legislative session, especially for LGBTQ+ Americans,” Lieberman said. “When trans kids have access to gender-affirming spaces at school, like a locker room, a restroom, a sports team, they are 25% less likely to commit suicide. And when we look at rates of suicidality and depression, we know that they are significantly higher when trans kids don’t have access to those gender-affirming spaces.”

Almost half of trans youth featured in a study by the Suicide Prevention Resource Center say they have strongly considered ending their lives.

Reports from the Centers for Disease Control and Prevention find trans youth often report feeling isolated and excluded in academic environments and that discrimination puts them at increased risk for poor mental health, suicide, substance abuse, violence and other health risks.

However, research shows that welcoming school environments that prohibit bullying and harassment in schools have been linked to positive outcomes for these students, according to research in The American Journal of Public Health.

In an interview with ABC News, Sunny raved about her latest baseball game, saying, “I think it might have been the best game we played yet. And it was one of the funnest games. It was just fun because a lot of people got out and a lot of hits.”

However, the Concerned Women for America, a conservative Christian group, is against trans girls and women participating in women’s sports, but asserts that advocating for protections for female athletes “does not mean advocating against trans athletes.”

“The issue is about the basic fairness and opportunities that women have fought for centuries to obtain,” the group said in a statement to ABC News. “We are not saying trans athletes can’t compete, it’s just not fair for them to compete in women’s sports … The disparity comes when forcing women to compete against a biological male that has innate biological differences, giving them physical advantages that simply cannot be erased.”

There is no evidence that trans athletes are disproportionately dominating sports that correlate with their gender identity or that they have an advantage in their sport, Lieberman said. The Texas bill that was under consideration does not cite any evidence of this either.

In April, amid the onslaught of legislative activity on trans student-athletes, the NCAA Board of Governors issued a statement in support of trans participation in college sports.

“The NCAA has a long-standing policy that provides a more inclusive path for transgender participation in college sports,” the statement read. “Our approach — which requires testosterone suppression treatment for transgender women to compete in women’s sports — embraces the evolving science on this issue and is anchored in participation policies of both the International Olympic Committee and the U.S. Olympic and Paralympic Committee.”

Bryant said that she fears what the consequences might be for her daughter if the Texas legislation is signed into law.

“I have nightmares about her future already,” Bryant said. “I already have obstacles in place because she’s trans. We weren’t exactly excited to find out that she was trans — it’s scary. I lay in bed and think about whether she’ll get a job one day or whether she’ll find a partner, or will she be murdered by somebody simply for existing.”