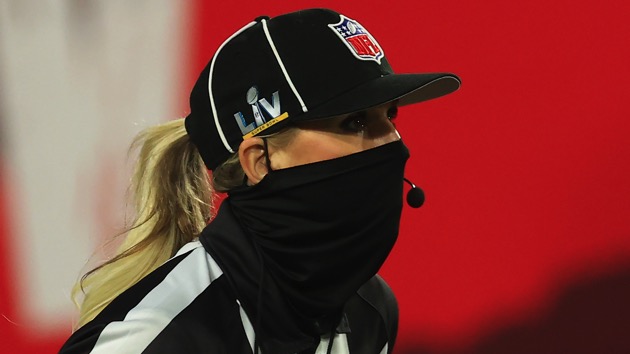 (TAMPA, Fla.) — Three women made history at Sunday’s Super Bowl, which saw a record number of women with on-field roles as the Tampa Bay Buccaneers defeated the Kansas City Chiefs in Tampa.

NFL referee Sarah Thomas made history as the first woman to officiate a Super Bowl.

She earned praise from first lady Jill Biden and others on social media who applauded her glass ceiling-shattering achievement.

With the Buccaneers’ 31-9 win over the Chiefs, Bucs’ assistant defensive line coach Lori Locust and assistant strength and conditioning coach Maral Javadifar made history as the first women to be on the coaching staff of a winning Super Bowl team.

Locust and Javadifar were led by Bucs head coach Bruce Arians, the oldest coach to ever win a Super Bowl at 68. He created the most diverse staff in the history of the NFL with three Black coordinators, a Black assistant head coach and two full-time coaches that are female.

“There is a global shift that’s happening in sports and it’s amazing,” Javadifar told ABC News’ Kayna Whitworth ahead of the Super Bowl.

Javadifar, the daughter of Iranian immigrants, became a college basketball player who went on to earn a doctorate in physical therapy along with a degree in molecular biology.

Her expertise in body mechanics made her a perfect fit for the Buccaneers, with whom she is coaching her second season.

“We’re not just happy to be here,” she said of the Super Bowl berth. “We’re continuing to prepare to win.”

Locust, a mother of two sons, started playing semi-professional football at age 40 and then, sidelined with an injury, began coaching, working her way up from smaller football leagues to the NFL.

When she coached at the semi-pro level, she began attending coaching symposiums where she was the only woman in a room of 600 men.

In 2018, Locust served as a defensive line coaching intern for the Baltimore Ravens during the team’s training camp.

Locust — who has a nearly four-decade history with Arians, who coached Locust’s ex-husband at Temple University — is also in her second season coaching for the team.

“To me, if there’s going to be any influence, it would be women that are my age saying not what if, but why not,” Locust told Whitworth of her history-making Super Bowl role. “And really taking a second to find out what it is that they feel passionate about.”