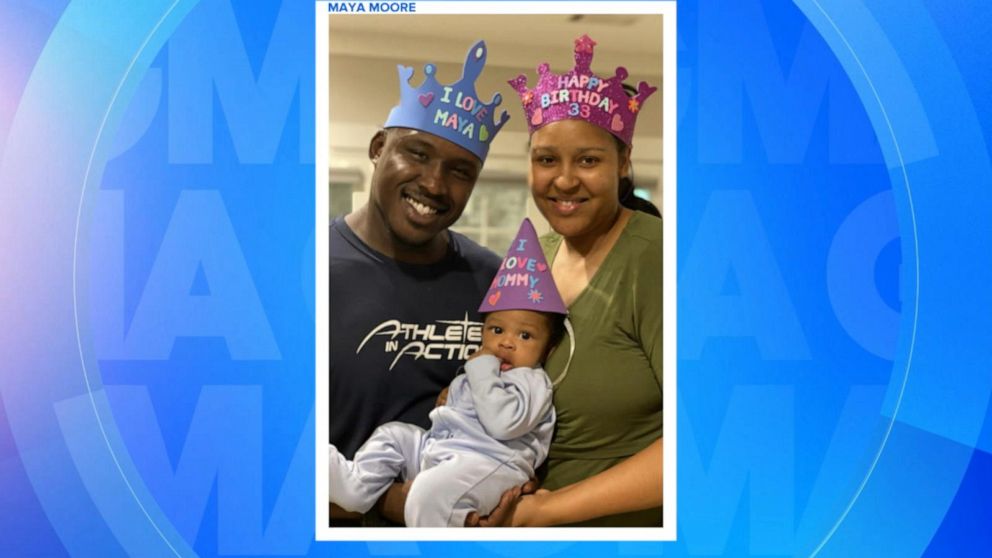 Moore and Irons wed in 2020, shortly after Irons was freed after spending over two decades in prison.

Moore, who won four WNBA championships with the Minnesota Lynx and as well as league MVP in 2014, stepped away from the game at the height of her career to focus full time on helping Irons overturn his conviction.

At 16 years old, Irons was tried and convicted as an adult by an all-white jury for the burglary and shooting at the home of 38-year-old Stanley Stotler. Irons maintained his innocence while he was in prison, saying he was wrongly identified during the lineup.

Moore and Irons formed a close friendship in 2007, before her freshman year at the University of Connecticut, when she met him through a prison ministry she participated in with extended family in Missouri.

After years of fighting, a Missouri judge overturned Irons’ conviction in March 2020, saying there were problems with the way the case had been investigated and tried — including a fingerprint report that would’ve proved Irons’ innocence, not being turned over to his defense team.

Irons told “GMA” in September 2020, when the couple announced their marriage, that he proposed to Moore on the night he was freed.

“When I got out, we were in the hotel room, we had some friends in the room, it was winding down and we were extremely tired, but we were still gassed up on excitement,” Irons recalled. “It was just me and her in the room and I got down on my knees and I looked up at her and she kind of knew what was going on and I said, ‘Will you marry me?’ She said, ‘Yes."”

The couple’s love story and fight for justice is featured in an ESPN “30 for 30” documentary, “Breakaway,” that was released last year.