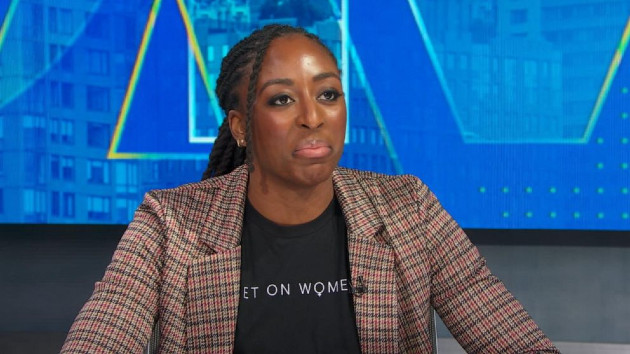 (NEW YORK) — As seven-time WNBA All-Star Brittney Griner enters her 54th day in Russian custody, the WNBA Players Association has a new message amid concerns over her safety and mental health.

“We move intentionally and given the nature of Brittney’s situation — it was very important for us to be intentional about doing the best thing to ensure that we don’t compromise her coming home,” Ogwumike told Robin Roberts in an exclusive interview. “A lot of that had to do with educating ourselves about the details of what was going on. As much as we could know. But then understanding how important it was for us to be strategic about when and how we speak about her.”

The 31-year-old Phoenix Mercury star and two-time Olympic gold medalist was arrested in February, one week before Russia invaded Ukraine. Russian customs released video that appeared to show Griner going through security at an airport near Moscow and an airport employee removing a package from her bag. Griner had vape cartridges containing hashish oil — an offense punishable in Russia by up to 10 years in prison — according to Russian state media.

“It’s tough — that could have been us,” Ogwumike said, who has also played overseas during the off-season. “We’re really most concerned about her health and safety. Especially her mental health. We’re hearing that … she’s OK. But we want her home.”

In a statement, the U.S. State Department told ABC News: “We are closely engaged on this case and in frequent contact with Ms. Griner’s legal team,” adding that Griner has not received a consular visit since March 23 but she was in “good condition.”

“The consular officer who visited with Brittney Griner was able to verify that she is doing as well as can be expected under these very difficult circumstances,” Ned Price, a spokesperson for the State Department, said.

Ogwumike said she believes there is a gender issue at play in Griner’s case.

“When is it not? It’s disappointing that the question of it being a gender issue is top of mind now when it comes to this type of circumstance and the reality is she’s over there because of a gender issue, pay inequity,” she said. “I played in Russia for four years and played in Poland for one year and China for two years. We go over there to supplement our incomes and quite frankly to maintain our game. Our teams encourage us to keep up with our game by going over there and being more competitive. There’s so much that’s at play that, you know, we live politically intrinsically.”

The top WNBA salary is $228K, whereas star NBA players can make upwards of $1 million a year.

While Ogwumike said “we’re treated well,” she explained that “we don’t want to play 12 months out of the year — we don’t want to feel as though we have to go over there to get what we want to get at home.”

“Before we get into tonight’s events, I want to take a moment to reiterate the WNBA’s support for Phoenix Mercury star Brittney Griner. Please know that getting her home safely continues to be our top priority,” she said.