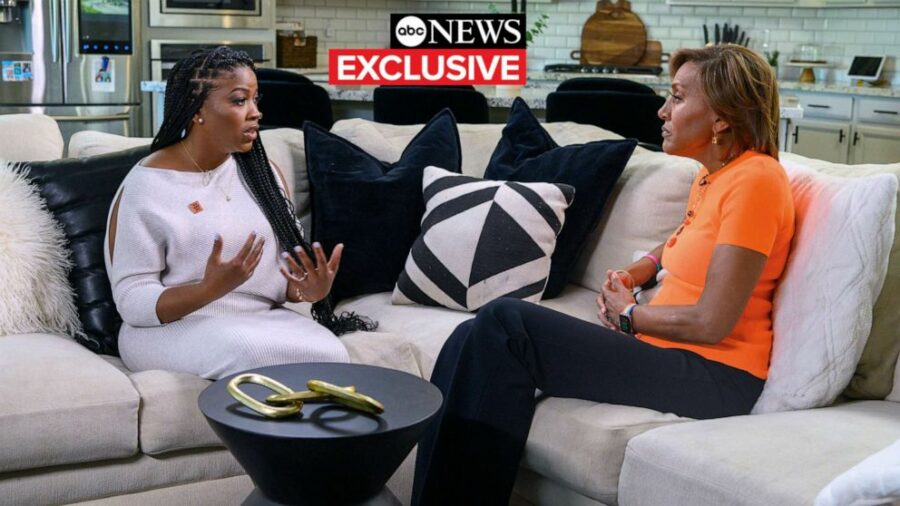 (NEW YORK) — Cherelle Griner, the wife of WNBA superstar Brittney Griner, who has been detained in a Russian prison for nearly 100 days, spoke for the first time on Tuesday in an exclusive interview with “Good Morning America.”

Griner told “GMA” co-anchor Robin Roberts that the support her wife has gotten from the league has brought the WNBA star “comfort” amid her detention in Russia.

The WNBA, which kicked off its 2022 season on May 6, is honoring Griner with a floor decal bearing her initials and jersey number (42) on the sideline of all 12 WNBA teams.

“Things like that matter, like, it has her hopeful,” Cherelle Griner told Roberts. “It lets her know she’s not forgotten.”

“Those small moments, I know give her some type of hope,” she added.

Brittney Griner, a two-time Olympic gold medalist who plays for the Phoenix Mercury, was visiting Russia to play basketball off-season when she was arrested in February at Sheremetyevo International Airport near Moscow for allegedly having vape cartridges in her luggage that contained hashish oil — an illegal substance in Russia.

She was charged with “large-scale transportation of drugs” and could face up to 10 years in prison, according to the New York Times.

The U.S. government classified Griner’s case on May 3 as “wrongfully detained” in Russia, which means that the U.S. would work to negotiate her release, as opposed to letting her case play out in the Russian legal system.

State Department spokesperson Ned Price said on Friday that a U.S. consular officer was able to meet with Griner on Thursday May 19, for the second time in a week.

Price said that the official “found her continuing to do as well as could be expected under these exceedingly challenging circumstances.”

Price said that he spoke with Cherelle Griner earlier this month by phone, assuring her that the administration was doing everything it could to ensure the WNBA player’s release.

Calls to free Brittney Griner escalated following the release of Marine veteran Trevor Reed last month, who was freed from Russian prison as part of a prisoner exchange. Former Marine Paul Whelan has also been detained in Russia since 2019.