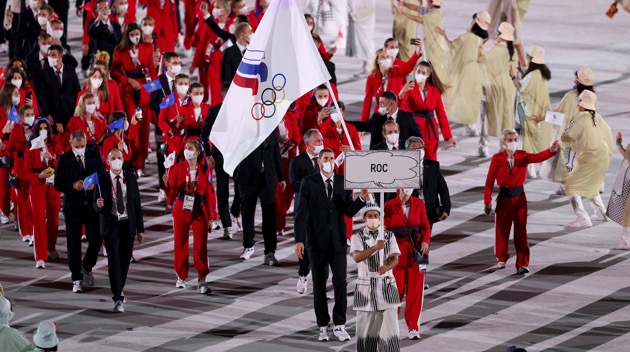 (BEIJING) — When the Olympic athletes take the field during the 2022 Games opening ceremony in Beijing, there will be one group that won’t show off their national pride.

Russian athletes are only able to compete under the Russian Olympic Committee (ROC) flag due to an ongoing ban over the country’s previous doping violations.

Doping regulators contend this punishment is justified, given the country’s cover-up.

There are 204 Russian athletes competing in the 2022 Winter Games as “neutrals” under the moniker ROC as part of ongoing sanctions imposed by the World Anti-Doping Agency (WADA). Russia cannot officially send any athlete to an international sports competition until December 2022.

While WADA’s ban on the country was severe, the agency and International Olympic Committee have made special arrangements for athletes who have proven to be clean.

Under the IOC’s rules, Russian athletes are prohibited in any form from showing any representation of the country, including its flag or national anthem.

“All public displays of the organization’s participant name should use the acronym ‘ROC,’ not the full name ‘Russian Olympic Committee,"” the IOC rules state.

In any event where a ROC athlete is awarded a medal, a Tchaikovsky song piece is played instead of the Russian national anthem, and the ROC flag, which features the Olympic rings and red, blue and white stripes, will be flown.

This is the third Olympics in a row where the country’s athletes couldn’t officially represent Russia.

The Russians were banned from competing in the 2018 Winter Olympics in PyeongChang, South Korea, however, athletes that passed doping screenings were allowed to compete under the Olympic Athletes from Russia (OAR) delegation.

The punishments date back to 2015, after athletes came forward to WADA and provided evidence of a decade of state-sponsored doping. The Russian government has denied any involvement and has blamed several coaches.

However, in 2016, whistleblower Grigory Rodchenkov, the former head of Russia’s anti-doping laboratory in Moscow, provided evidence that he, other lab officials and Russia’s FSB security service worked to hide hundreds of positive doping tests.

While the Russians appealed WADA’s sanction, the agency found more evidence of doping cover-ups. A WADA compliance report in late November 2019 said it had found that hundreds of likely positive doping tests had been deleted from a database of results held by Russia’s anti-doping lab given to the agency that year.

In December 2019, WADA’s executive committee voted unanimously to ban Russia from fielding any athletes at international sporting events, including the 2020 summer Olympics in Tokyo and the 2022 winter Olympics in Beijing.

“Russia was afforded every opportunity to get its house in order and re-join the global anti-doping community for the good of its athletes and of the integrity of sport, but it chose instead to continue in its stance of deception and denial,” Sir Craig Reedie, WADA’s then-president, said in 2019.

WADA’s ban, which was reduced from four years to two years, also prohibits Russia from officially participating in the 2022 World Cup in Qatar.

Other nations have been banned from competing in past Olympics. The IOC banned Afghanistan from the 2000 summer Olympic Games in Sydney because of the Taliban’s discrimination against women.

In 2016, Kuwait was banned from officially sending athletes to the 2016 Summer Olympic Games in Rio due to a national law that conflicted with the Olympic Movement. Athletes from that country took part in the 2016 games under the moniker “athletes from Kuwait.”

Suni Lee explains why gymnastics is her ‘happy place’

Olympian, swim groups look to turn the tide on the country’s racial gap in drowning