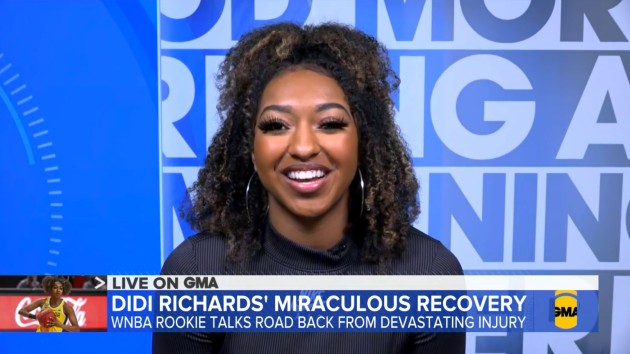 (NEW YORK) — DiDi Richards is what hoop dreams are made of and before the basketball star tips off her WNBA career on Friday, she credited a trait she learned from her father that helped her get back on the court after a severe injury last fall.

“He definitely instilled mental toughness throughout my life and when that injury happened it was kind of second nature. I just knew that I had an undeniable mindset that I was going to work hard and I was going to figure out how to get back on the court, but first off how to walk,” Richards told ABC News’ Good Morning America.

The former Baylor Lady Bears star guard was in the midst of her senior season when a play during practice last October went horribly wrong. As Richards went airborne attempting to intercept a pass, she collided with teammate Moon Ursin at full speed and hit the floor, sustaining a spinal cord injury without radiographic abnormality that causes temporary impairment and later experienced temporary paralysis from the hips down, ESPN first reported.

Within 38 days after recovery and rehab, Richards made it back onto the court notching four points, seven assists and two steals in a 67-62 victory over South Florida.

“One day I could feel my toes and then the next day I couldn’t feel them,” she said. “So it was just being able to kind of cope with [knowing] every day was subject to change — and being able to keep a positive mindset through it all.”

Tomorrow the 22-year-old from Cypress, Texas, will lace up for the first time with the New York Liberty and join an elite list of professional women in the league’s 25th season.

“I think I can speak for all young kids, you have dreams and inspirations and mine was to be drafted,” Richards said. “Now being a part of one of the 144 girls that are even playing in the WNBA, one of the best leagues in the world, is pretty special and it’s hard to put into words.”

While Richards said she’s “very competitive,” she initially cared more about “being super girly and cute” than hitting three-pointers on the court.

“Sweating does not involve cute,” she said with a laugh. “So [basketball] really wasn’t something I wanted to do — but I’m happy my parents pushed me.”

Now, heading into her rookie season, Richards said she is most looking forward to playing against the women she’s looked up to for decades in the sport.

“I think it’s exciting to be able to learn from Lisa Leslie, Candace Parker and now being able to see Candace Parker on the court — or to watch Breanna Stewart and maybe one day play against her and the Seattle Storm — It’s kind of exciting,” she said.

Richards and the New York Liberty will take on the Indiana Fever at 7:00 P.M. ET on NBA TV.