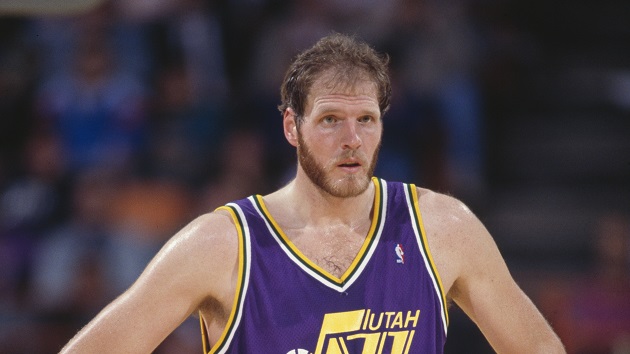 (SALT LAKE CITY) — Former 2-time Defensive Player of the Year Mark Eaton died on Saturday after an apparent bicycle crash, according to the team. Eaton was 64 years old.

“The Utah Jazz are profoundly saddened at the unexpected passing of Mark Eaton, who was an enduring figure in our franchise history and had a significant impact in the community after his basketball career. Mark played his entire 11-year NBA career with the Jazz and his number was retired as an NBA All-Star and two-time NBA Defensive Player of the Year,” the Utah Jazz said in a statement. “His presence continued around the organization as a friend and ambassador while giving back as a businessman and volunteer to his adopted hometown in Utah. We extend our deepest condolences to his wife Teri and their extended family. Mark will be greatly missed by all of us with the Jazz.”

We are heartbroken by the passing of Utah Jazz legend Mark Eaton.

Our thoughts are with his family as we all mourn the loss of a great man, mentor, athlete and staple of the community. pic.twitter.com/HkINyLF9ix

The team said that police said Eaton was found lying in the road around 8:30pm Friday night after apparently crashing his bike in Summit County, Utah. The Jazz also said that the Summit County Sheriff’s Office said there was no reason to belive a vehicle was involved.

Listed at 7’4″, Eaton was known for his defensive play. He led the league in blocks four times, won the Defensive Player of the Year award twice, and made the All-Defensive 1st Team three times. He ended his career with 3064 blocks, good for fourth on the all-time leaderboard.

Eaton’s number 53 jersey was retired by the Utah Jazz during the 1995-96 season.

Current Jazz center and 2-time Defensive Player of the Year Rudy Gobert wrote a tribute to Eaton on Twitter.

“To my great mentor and friend @markeaton7ft4, one of kind and an amazing human being, i’m grateful for your presence in my life over the years,” Gobert wrote. “Gonna miss our conversations. But i know you’ll be watching.”

To my great mentor and friend @markeaton7ft4 , one of kind and an amazing human being, i’m grateful for your presence in my life over the years. Gonna miss our conversations. But i know you’ll be watching. pic.twitter.com/XDvEJTPCwp

2022 NFL Draft: A look at the biggest moments