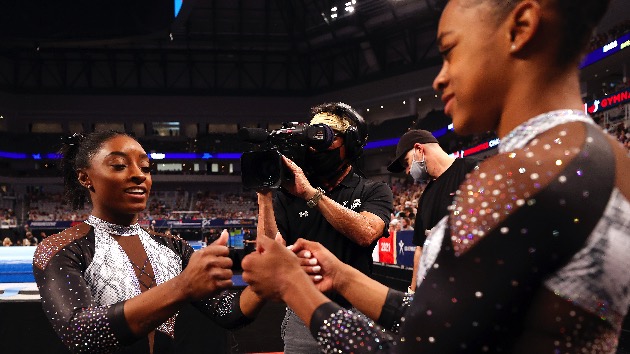 (ST. LOUIS) — Roughly every four years, when athletes take on the world stage at the Olympics, excitement buzzes over the USA gymnastics team. The 2021 Tokyo Olympic trials for Team USA are taking place June 24 through June 27 in St. Louis, Missouri, and gymnast Simone Biles is expected to easily clinch a spot on the team.

Also on the roster for the trials is Jordan Chiles, a Black gymnast who trains at the World Champions Centre alongside Biles. Chiles told ESPN she had once thought of quitting the sport, but encouragement from Biles kept her in the competition.

Sunisa Lee, a Hmong American, is also a front-runner to earn a spot with Team USA. Others, including Kayla DiCello and Emma Malabuyo, who are Asian women, are in the competition to become Olympians.

It’s a diverse competitive field that could influence young fans of color, as they see themselves represented in a predominantly white sport, according to Derrin Moore, founder of Brown Girls Do Gymnastics.

For the athletes who work with Brown Girls Do Gymnastics, an advocacy group for girls of color in the sport, having representation at the top of the field in the past, like Biles, Gabby Douglas and Laurie Hernandez motivated them. But it didn’t erase all of the financial and social hurdles that still keep many girls from playing competitively in the sport.

Moore remembers when Douglas became the first Black gymnast to win the gold medal for the individual all-around at the Olympics, in 2012, and how she began to get calls, emails and requests about her small gym in Decatur, Georgia.

She said Douglas’ win piqued the interest in gymnastics for Black and brown girls in the area, and families in search of answers found her gym.

“It just shines a light on the fact that we can do it,” Moore said. “Our phones were blowing up. People were calling in — ‘Hey, my daughter’s 4, and she’s jumping all over the bed, and she’s seen Gabby Douglas and wants to be just like her."”

In 2016, Team USA had the most diverse women’s gymnastics team to date — a team that included Biles, Douglas and Hernandez and dominated, scoring more than 8 points over the second-place Russian team.

However, it wasn’t until 1980 that Luci Collins Cummings and Ron Galimore became the first Black woman and man to make the Olympic gymnastics team, according to Team USA, though they did not compete that year due to the U.S.’s boycott of the Moscow Olympics. That same year, gymnast Tracee Talavera also became one of the first known Latina athletes to make the U.S. Olympic gymnastics team.

Only six Black women have competed on the USA gymnastics team since 1984, out of roughly 45 women.

Researchers and coaches both say representation has played a big role in getting young children of color into the sport.

“When Black young girls and Black women see those images of Simone [Biles], Nia [Dennis] and others — we know that it becomes possible,” said C. Keith Harrison, a sports business management professor at the University of Central Florida.

Nia Dennis, a former UCLA gymnast, went viral for her floor routine in January that embraced Black culture. She told ABC News she used her college performance to honor the anti-racism and Black Lives Matter movements of 2020. Although she didn’t intend to get millions of views online, she did want her performance to reach younger gymnasts of color.

Her message for them: Be authentically yourself.

As a young athlete, Dennis said she was one of the only Black girls in the gym. She said she would get teased because her hair would stick up straight or because the chalk would show up on her skin.

“There was a time where I really did seek validation from others, and that was really affecting me,” Dennis said. “I really wanted to change the color of my skin for a long time, and I wanted to change my hair.”

In the past few years, several gymnasts have called out instances of racism in the sport.

Last year, Biles told NBC’s “Today” about discriminatory comments on her skin: “I was on a world scene, and what made the news was, another gymnast saying that if we painted our skin black maybe we would all win because I had beaten her out of beam medal, and she got upset. And that [was] really the news, rather than me winning worlds.”

Also in 2020, former Alabama gymnast Tia Kiaku talked with ESPN about past coaches and teammates that she said made racist jokes and used racial language.

Moore said that the lack of diversity and the culture of the sport may dissuade families of color from putting their children in gymnastics.

“Gymnastics has not been a sport for Black folks,” Moore said. There are no gymnastics programs at any of the historically Black colleges and universities across the country.

In 2020, USA Gymnastics, the national governing body for the sport, announced new commitments to improve diversity, equity and inclusion initiatives within the organization. The pledges included staff and leadership training, panel discussions and roundtables, as well as research into the impact of implicit bias in gymnastics in order to address these issues.

Former UCLA gymnastics coach Valorie Kondos Field and Moore also told ABC News that gymnastics takes a lot of time, money and traveling, which contributes to the lack of racial and socioeconomic diversity in the sport.

Kondos Field, who coached at UCLA from 1991 to 2019, said that over the years, many coaches and clubs have adapted to allow for scholarships, tuition plans and other creative ways that allow people from different backgrounds to find their way into the sport.

In the meantime, gymnasts of color are using their platforms to advocate for diversity and equity in the sport and beyond.

Morgan Hurd, a world champion, won’t be at the Olympic trials due to a recent surgery, but she’s become a prominent voice of the “Stop Asian Hate” movement against hate crimes.

And the Biles family gym has supported gymnasts of color and put them on a national stage, including Zoe Miller, Karis German, Sydney Barros, Amari Drayton and Chiles, who all made it to the U.S. Gymnastics Championships alongside Biles.

Brown Girls Do Gymnastics works with gyms to create diverse and inclusive gyms for young girls of color, in an attempt to change the culture of gymnastics.

Dennis, who said she has trained with Biles and Douglas, said seeing other Black women pushed her to be better.

“It was great to be in the same room as somebody that you look up to and see so many similarities,” Dennis said. “To see [Douglas] so successful in the same environment just pushed me and motivated me and gave me the reassurance to know that I can do the same thing.”

To young girls looking to follow in their footsteps, Dennis said, “There are hard days. There are going to be times where you feel like you want to quit. But I promise, the grind is worth it.”