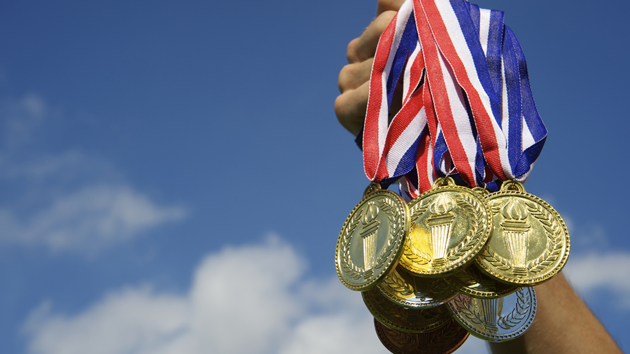 (NEW YORK) — As the Tokyo Paralympic Games near their end, Team USA athletes have already made history — smashing world records at the international competition.

Here are some of the highlights from Team USA’s stint at the games so far:

Anastasia Pagonis, 17, won a gold medal in the S11 400-meter freestyle, breaking her own world record at 4:54.49 and winning Team USA’s first gold of the games on day two. She had set the world record at the Paralympic trials.

The S11 classification, according to World Para Athletics, is for “visually impaired athletes with low visual acuity and/or no light perception.” To even the competition, all S11 athletes wear blackened goggles.

“If you told me this a few years ago, I wouldn’t even think I’d be alive so just being here and being able to have this experience and this opportunity — unbelievable,” Pagonis told Team USA’s website.

Gia Pergolini, also 17, swam in the S13 100-meter backstroke. She had broken the world record during preliminary heats, but in the race for gold, she smashed it again with a time of 1:04.64.

The S13 classification is for athletes who are visually impaired, according to World Para Athletics, but these athletes have higher visual acuity and/or a larger visual field than athletes in S11.

Robert Griswold, who has won two world championships, claimed the gold in the men’s 100-meter backstroke S8 — breaking the world record that was set at the 2016 Rio Paralympics. In 2016, he earned the bronze, but came back and claimed gold in Tokyo.

“I just had more peace than I’ve ever had before a race,” Griswold told Team USA’s website. “I felt peace knowing that I’ve got a family and friends who love me and people who really value me and care about me. I carried that with me, and I’m trying to do the best I can and give back to the people who’ve given so much to me.”

Nick Mayhugh won gold for Team USA in the T37 100-meter dash — earning a world record time of 10.95. Mayhugh committed to track and field just two years ago when his original sport, soccer, was removed from the Paralympic program.

He’s the first T37 athlete to break the 11-second mark.

“It’s changed my life,” he said. “It’s everything I’ve worked for in the last year, and a half came down to today and this competition. I finally feel like I’ve proved myself in the world of track and field.

The T37 classification is for athletes who have moderate hypertonia, ataxia or athetosis on one half of the body, according to World Para Athletics. This often includes athletes with a traumatic brain injury or cerebral palsy, like Mayhugh.

On the long list of record-breakers, this year is Breanna Clark, who won the gold in the T20 400 meters. She rounded the track in a total of 55.18 seconds to beat her 2018 world record and has defended her 2016 title.

The T20 classification is for athletes with intellectual disabilities, like autism, such as Clark.

She’s also the daughter of Olympian Rosalyn Clark, who won two silver medals in the 400 meters and 4×400-meter relay at the 1976 Montréal Games.

Women have won 66% of Team USA’s medals in Tokyo

The women on the U.S Paralympic team are bringing their A-game. Women have won about 66% of U.S. medals so far, and 70% of the country’s gold medal, NBC Sports reported.

The U.S. Paralympics team has more women than men for the first time, although women only account for about 42% of Paralympians overall, according to the Tokyo 2020 Organizing Committee.

“Inclusion is at the core of everything the IPC does,” IPC President Andrew Parsons said in a statement earlier this year. “We are constantly striving with our members to increase female participation at all levels of the Paralympic Movement, from athletes to administrators, from coaches to Board members. … Despite this progress, we will not rest on our laurels, and we will continue to work hard with our members to increase women’s participation at all future Games until we reach gender equality.”