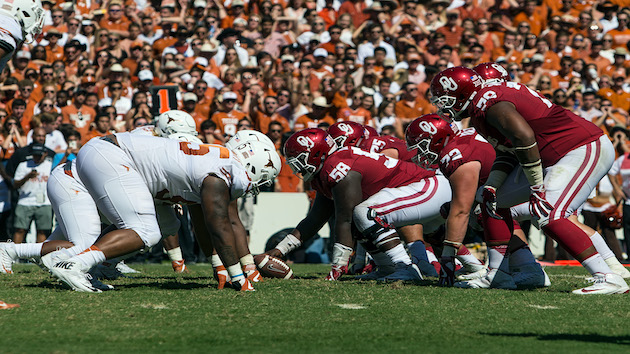 (DALLAS) — The Presidents of the University of Texas and the University of Oklahoma have sent a letter to SEC commissioner Greg Sankey requesting an invitation to join the conference, according to a joint statement.

On Tuesday, Sankey released a statement confirming he received the letter.

“While the SEC has not proactively sought new members, we will pursue significant change when there is a clear consensus among our members that such actions will further enrich the experiences of our student-athletes and lead to greater academic and athletic achievement across our campuses,” Sankey said in a statement. “The Presidents and Chancellors of the SEC, in their capacity as the conference’s Chief Executive Officers, will consider these requests in the near future.”

Per SEC bylaws, 11 of the 14 schools would need to vote in the affirmative to extend invitations.

On Monday, the two schools issued a joint statement saying that they notified the Big 12 that the schools will not renew their grant of media rights in 2025.

“Providing notice to the Big 12 at this point is important in advance of the expiration of the conference’s current media rights agreement,” the statement said. “The universities intend to honor their existing grant of rights agreements. However, both universities will continue to monitor the rapidly evolving collegiate athletics landscape as they consider how best to position their athletics programs for the future.”

Big 12 commissioner Bob Bowlsby responded to Texas and Oklahoma in a statement on Monday.

“Although our eight members are disappointed with the decisions of these two institutions, we recognize that intercollegiate athletics is experiencing rapid change and will most likely look much different in 2025 than it does currently,” the statement said. “The Big 12 Conference will continue to support our member institutions’ efforts to graduate student-athletes, and compete for Big 12 and NCAA championships. Like many others, we will use the next four years to fully assess what the landscape will look like in 2025 and beyond. The remaining eight institutions will work together in a collaborative manner to thoughtfully and strategically position the Big 12 Conference for continued success, both athletically and academically, long into the future.”