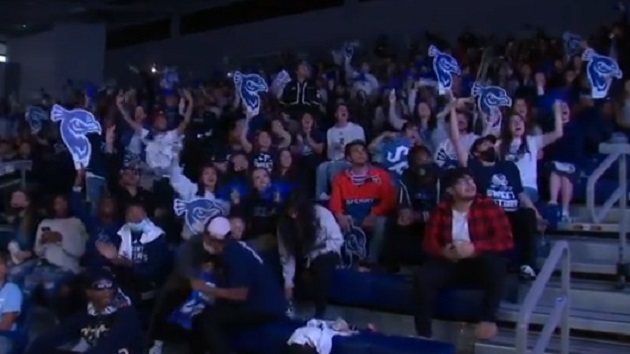 (PHILADELPHIA) — The underdog Saint Peter’s University basketball squad will attempt on Sunday afternoon to do what no 15th-seeded team has done before — make it to the Final Four of the men’s NCAA Tournament.

The Peacocks face yet another tall task to continue an unprecedented March Madness run when they take on No. 8 University of North Carolina in an Elite Eight matchup in Philadelphia. The tipoff is set for 5 p.m. EST.

Saint Peter’s is the first 15th-seeded team ever to make the Elite Eight in the annual tournament’s 83-year history.

The Peacocks on Friday went into a Sweet Sixteen game against the Purdue Boilermakers as a 13-point underdog and secured a 67-64 victory, the latest in a string of wins over top-seeded teams.

Saint Peter’s is making just its fourth appearance in the tournament, its first since 2011, when Purdue knocked them out in the first round.

But this year has been like no other for the team from Jersey City, New Jersey.

In the first round, they shocked No. 2 seed Kentucky with an 85-79 overtime victory despite the Wildcats being favored by 18.5 points. They were an eight-point underdog to No. 7 Murray State but pulled off a 70-60 second-round win.

The University of North Carolina, which has won the NCAA men’s basketball tournament six times, enters Sunday’s game as an 8.5-point favorite over the Peacocks. The Tar Heels upset No. 4 UCLA to make it to the Elite Eight after knocking off No. 1 Baylor in second-round play.

“I got guys from New Jersey and New York City. You think we’re scared of anything?” Saint Peter’s coach Shaheen Holloway said during a post-game press conference following the Murray State win.