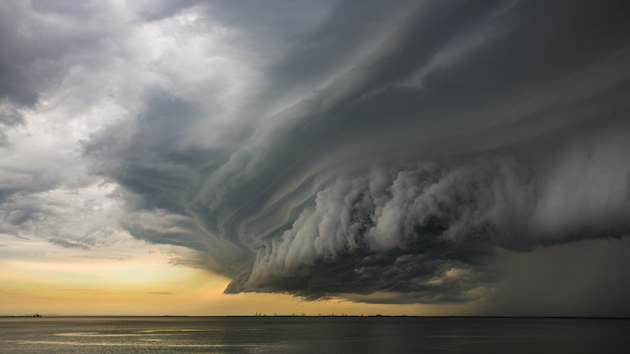 The storm is expected to make landfall in northern Japan on Wednesday morning local time. It was located approximately 134 nautical miles east-northeast of Yokosuka, Japan (a town that houses a U.S. military base and is some 35 miles south of Tokyo) at 11 a.m. ET, according to the U.S. Navy’s Joint Typhoon Warning Center.

The naval weather center said in its 11 a.m. ET release that, within 12 hours, the storm will be just off the northeastern coast of Japan near the city of Sendai (some 230 miles north of Tokyo), and within 24 hours the center of the storm will have passed over the archipelago nation completely.

The Japan Meteorological Agency said the storm is carrying maximum wind speeds of 44.8 mph and maximum wind gust speeds of 67.1 mph. It is moving north at just over 12 mph.

Japan’s national public broadcaster NHK reported heavy rainfall along northeastern Japan’s coastal cities and warned that the storm will likely cause downpours in the region. NHK reported that local officials are also warning of mudslides and potential flooding in low-lying areas in the region.

While the storm was never forecast to strengthen into a typhoon, news outlets and local officials have been labeling it as such. In a statement Monday, Tokyo 2020 organizers predicted that the storm will have “limited impact on the Games,” but said any changes in competition schedule would be announced on its website and via the Tokyo 2020 app.

Rowing and archery events that were scheduled for Tuesday were rescheduled, but no other changes to event lineups have been announced.

While the tropical storm is missing the Olympics host city, athletes will likely not see relief from the infamous Tokyo summer heat.

Some athletes participating in outdoor events have complained about the extreme heat conditions potentially impacting their performances. The No. 1-ranked men’s tennis player, Novak Djokovic, has advocated for matches to be moved to the late afternoon to avoid the blazing midday heat.

Athletes participating in surf competitions, which made an Olympics debut in Tokyo, reportedly embraced the extreme weather as the tropical storm churned large waves off of Japan’s coast. American Carissa Moore rode the waves into the history books on Tuesday, becoming the first woman ever to win a gold medal in surfing at the Olympics.