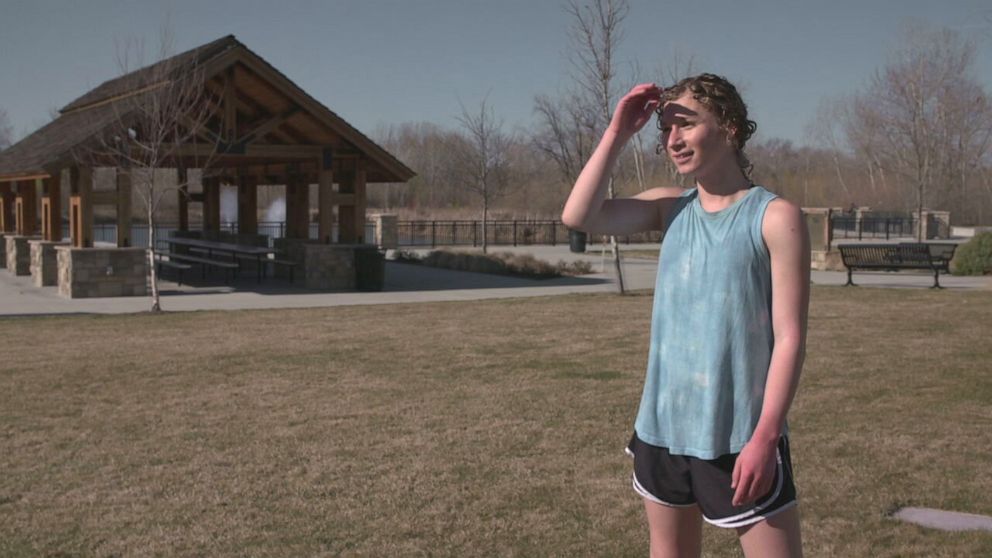 (NEW YORK) — Since high school, running has taken up much of 20-year-old Lindsay Hecox’s life, giving her not only an outlet to build friendships, but also a sense of identity and competitiveness. It’s a “core part” of who she is, she said.

“I did cross-country as well and kind of realized this is my thing,” Hecox, of Boise, Idaho, told ABC News’ Kayna Whitworth. “I’m good at it, I like it, and I’m going to continue doing it, because I wanted to really get better.”

Yet, while discovering this fundamental aspect of her life in high school, Hecox was suppressing another. Hecox, a transgender woman, was assigned male at birth. Throughout high school, she said she presented as male, but like many transgender teens, she said it did not match her gender identity.

“I felt like I wasted a little bit of my life trying to pretend to be a guy and just repressing everything,” Hecox said. “That seems so much better now.”

It wasn’t until heading to college that Hecox decided to live her life authentically, and she began transitioning. However, as she waited for the track team tryouts at Boise State University, a new law threatened to uproot all that she’d worked for.

Bills like this, Hecox said, may be driven by misconceptions that people have about trans women’s abilities in sports.

“I don’t know, [it’s] something about trans women athletes. They feel like it’s going to be some huge, tall, muscular superstar,” Hecox said. “I don’t even think most of my teammates would even think of me as trans — I just look like a regular girl.”

The bill prompted Hecox to take action. In April 2020, with the help of the American Civil Liberties Union and other advocacy groups and legal firms, she filed a lawsuit opposing the legislation. In August, a judge issued a preliminary injunction, effectively preventing the law from being enforced while the case remains pending.

Still, the bill opened a legislative Pandora’s box, with other states following in Idaho’s footsteps. At least 28 states have either proposed or passed approximately 52 bills excluding trans athletes from participating in school sports — namely, trans girls and women in grades K-12 and college. In Minnesota, legislators have introduced a bill that would make trans female participation in school sports a petty misdemeanor, possibly punishable by a fine.

“As a parent, the one thing we cannot do … is silence our children’s spirit,” he said during his testimony.

“I need you to understand that this language, if it becomes law, will have real effects on real people,” he added. “I ask you, please, don’t take that away from my daughter or the countless others like her.”

Such marginalization can have devastating effects on trans teens. In response to the Centers for Disease Control and Prevention’s 2017 Youth Risk Behavior Survey of nearly 132,000 students, 27% of those who identified as trans said they felt unsafe at or traveling to or from school, and nearly 35% said they’d attempted suicide.

However, some cisgender female athletes, who identify with the gender they were assigned at birth, say they feel like they’re being pushed out of their sports by trans athletes.

“I know what it’s like to be beat by a biological male in my own sport,” Madison Kenyon, 19, a sophomore runner at Idaho State University, told ABC News. “I’ve seen them beat some of the fastest girls in this nation. … We’re not here for a participation trophy. We’ve been working so hard. We’ve been making so many sacrifices, and we’re not just here to participate. We want to compete, and we want to compete on a fair playing field.”

Chelsea Mitchell, 18, is another cisgender woman who says she lost several state track titles after running against two trans girls in high school. Mitchell came in third place, behind the two transgender girls.

“Personally, I lost four state championships … and countless other opportunities to advance to meet, to place,” she said. “So, I decided to speak out, because I believe that this was unfair for me and my other competitors.”

Mitchell was able to beat one of the transgender runners in later races. She said it made her feel like “I finally got the recognition I deserved.” She is currently a student-athlete on a scholarship at William & Mary in Virginia. Neither of the two trans competitors that once beat her were offered scholarships.

They’ve both said their position is not based on hate or anti-trans sentiment but about fairness and opportunity in their sport.

“I think that everyone should have a place to compete and everyone has a right to participate in sports, but the question is, where is that most fair?” Kenyon said. “For female athletes, it’s most fair for biological women to be competing against biological women.”

Joanna Harper, one of the world’s leading researchers on transitioning athletes, who is a trans woman athlete herself, said the science and biology related to who has an advantage in sports are more nuanced than these laws make it seem.

For example, Harper said it’s not uncommon in baseball for left-handed players to have some advantages over right-handed players. Athletic abilities vary regardless of the gender someone is assigned at birth, she said.

Moreover, she said, the hormone replacement therapy that a trans woman undergoes during transition changes her body in a way that allows “trans women and [cisgender] women to compete against one another in a meaningful fashion in most sports.”

“I would suggest that it is never the right response to outright ban trans athletes,” Harper said, adding that she believes that for all sports at all levels, “there is some set of solutions that can be implemented … and still allow for trans women to be integrated within women’s sports.”

While more studies may be needed to determine what these solutions should be, leading sports organizations like the NCAA have issued guidance based on their understanding of the current research. In 2011, the college sports organization’s Office of Inclusion released guidance stipulating that trans women should undergo a year of testosterone suppression before joining a team.

“I could feel myself getting slower, and I was all right with that,” she said.

Hecox said she believes the hormone replacement therapy brought her athletic abilities more within the range of other female athletes. In fact, despite a rigorous training schedule provided by the school, she was not fast enough to make Boise State’s track team in 2020.

While Hecox said she “felt pretty disappointed” with her times, she remains hopeful for a better future. She said she’ll continue to fight the trans athlete law and added that she’ll be trying out for the track team again in 2022.

“I don’t really mind if I don’t make the team,” she said. “As long as I have paved the road for future trans athletes to make a team and be happy.”