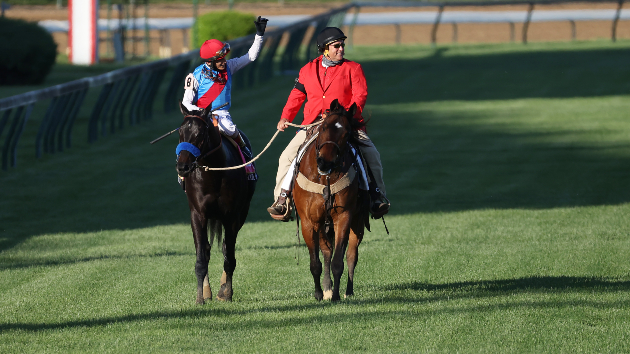 (NEW YORK) — The Kentucky Derby-winning horse, Medina Spirit, had been treated with an antifungal ointment containing a steroid that caused it to fail a postrace drug test, trainer Bob Baffert acknowledged on Tuesday.

Baffert issued a statement through his lawyer, saying that the horse was given the ointment once per day leading up to May 1st’s Kentucky Derby, as a treatment for dermatitis. He says that equine pharmacology experts have told him that the treatment could explain the test results.

Medina Spirit had tested positive for 21 picograms of the steroid betamethasone, Baffert said. That substance is typically given to horses therapeutically to help their joints. It is legal to use, but it is not allowed to be in the horse’s system, even in trace amounts, on race day in Kentucky.

If Medina Spirit were to test positive in a second round of testing, the horse would be automatically disqualified, making runner-up Mandaloun the winner.

Bob Baffert Tuesday statement below explains that Otomax, an ointment he says was recommended by his vet to treat dermatitis on Medina Spirit’s hind end, includes betamethasone.

Baffert also states that 21 picograms of betamethasone would have had no effect on the KYD outcome. pic.twitter.com/zQXCfJhdIH

“I intend to continue to investigate and I will continue to be transparent,” Baffert’s statement said.

“I had no knowledge of how betamethasone could have possibly found its way into Medina Spirit (until now), and this has never been a case of attempting to game the system or get an unfair advantage,” he added. “Second, horse racing must address its regulatory problem when it comes to substances which can innocuously find their way into a horse’s system at the picogram (which is a trillionth of a gram) level. Medina Spirit earned his Kentucky Derby win, and my pharmacologists have told me that 21 picograms of betamethasone would have had no effect on the outcome of the race.”

“Medina Spirit is a deserved champion and I will continue to fight for him.”

The horse is still expected to run in the second race in horse racing’s Triple Crown, the Preakness Stakes, on Saturday. Baffert, however, will not attend the race, saying he doesn’t want to be a distraction.