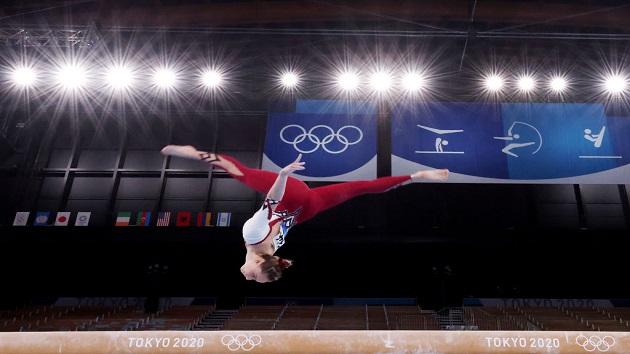 (TOKYO) — Female athletes are breaking with their sports’ apparel conventions — if not regulations — to prioritize their comfort during competitions, and making major statements in the process.

In Tokyo this week, members of the German women’s gymnastics team sported full-length bodysuits, as opposed to more ubiquitous — and revealing — leotards, while competing at the 2020 Olympics.

The team first debuted the unitards this past spring at the European Championships in Basel, Switzerland, in what the athletes said was a stand against the “sexualization of gymnastics.”

“It’s about what feels comfortable,” three-time Olympian Elisabeth Seitz said in a statement. “We wanted to show that every woman, everybody, should decide what to wear.”

While not an Olympic sport, the Norway women’s beach handball team took a similar stand when they wore shorts — instead of the requisite bikini bottoms — while competing at the Beach Handball EURO 2021 in Bulgaria earlier this month.

I’m VERY proud of the Norwegian female beach handball team FOR PROTESTING THE VERY SEXIST RULES ABOUT THEIR “uniform”. The European handball federation SHOULD BE FINED FOR SEXISM. Good on ya, ladies. I’ll be happy to pay your fines for you. Keep it up.

The ruling drew international attention, including from pop star Pink, who applauded the team for protesting the “sexist rules” while offering to pay the fines.

“We are overwhelmed by the attention and support from all over the world!” the team said after the game. “We really hope this will result in a change of this nonsense rule!”

‘Finding their voices’ on a variety of issues

These incidents are part of a larger narrative of female athletes in recent years “finding their voices and speaking out about a variety of issues — whether it’s mental health, sexual abuse, how they are feeling objectified in their respective uniform,” Kim Bissell, a professor and associate dean for research in the College of Communication and Information Sciences at the University of Alabama, told ABC News.

Wearing shorts or a unitard can be a way to denounce latent objectification in their respective sports, especially at a showcase as high-profile as the Olympics.

“There’s a lot of male gaze, particularly in the Olympics, because that’s when we actually get to see women’s sports in media,” Lindsey Maxwell, an associate professor in the School of Communication at the University of Southern Mississippi, told ABC News. “The most prominent showcasing of women’s bodies in sport is the Olympics, and so now they’re taking this opportunity to push back.”

That objectification has translated to the production of women’s sports, said Bissell, who has done research across multiple Olympics on how female beach volleyball athletes are covered differently than their male counterparts.

“With the female athletes, you would see just overt zooming in on body parts,” Bissell said. “It’s the same sport, so why are we covering it differently?

The importance of mental health has been another focus of Olympic athletes, including Naomi Osaka, who competed in Tokyo after withdrawing from two Grand Slam tournaments this year and taking a monthslong break from competitive tennis, and gymnast Simone Biles.

“I just never felt like this going into a competition before,” Biles said at a press conference Tuesday after she withdrew from the team final at the Tokyo Olympics. “I tried to go out here and have fun, and warm up in the back went a little bit better, but once I came out here I was like, ‘No, mental is not there."”

“I didn’t want to do something silly out there and get injured,” she added.

Biles, who also withdrew from the individual all-around this week, spoke out about the stress she was feeling as an Olympian, and the need to prioritize her safety — a decision several of her predecessors praised as one they felt they never could make.

Biles has been open about her mental health struggles before. She told “Good Morning America” that she sought out professional therapy and began taking anxiety medicine after she revealed she was one of dozens of gymnasts who were sexually abused by former USA Gymnastics doctor Larry Nassar, who was sentenced in 2018 to up to 175 years in prison.

Biles, who has also spoken about the depression she experienced after the abuse, has said one of the reasons she went to the Olympics was to be a voice for survivors of abuse.

On the power of breaking with uniform conventions, Maxwell pointed to Serena Williams’ custom catsuit at the French Open in 2018 as a touchstone. The compression bodysuit helped with blood circulation after the tennis great suffered from a pulmonary embolism after giving birth the year before, but it drew criticism from tennis officials as going “too far.” Williams has only continued to push boundaries in tennis fashion, including wearing a tutu weeks after the French Open.

“We’re spiraling out of Serena Williams taking a stand with the catsuit,” Maxwell said.

Whether it’s about attire or serious allegations, professional athletes may be fearful of using their voice for fear of retribution, such as not making a team or losing a sponsor, Bissell said.

“It’s a difficult power dynamic, where the athletes ultimately don’t have much of that power,” Bissell said.

She pointed to the case of track and field Olympian Kara Goucher. The distance runner told Women’s Running she was harassed and lost a six-figure sponsorship contract after publicly accusing her former coach, Alberto Salazar, of doping violations in 2015 because she was “considered controversial.” Salazar ultimately faced a four-year ban for doping-related offenses. This week, the U.S. Center for SafeSport permanently banned him, subject to appeal, citing sexual and emotional misconduct — allegations the coach has denied. Goucher was one of several athletes who also had accused him of abuse.

High-profile athletes continuing to use their platform to speak out can help pave the way for others to “find their voice” and reduce a “climate of silencing,” Bissell said.

Change also comes down to who ultimately is making the decisions, such as at the federation level.

“Who can we give a voice to, and do we want current athletes, former athletes?” Bissell said. “We’ve got to diversify that group of people who are making decisions.”

After the fine over the Norway women’s beach handball team’s uniform caused an uproar, European Handball Federation President Michael Wiederer said the organization would “do all it can to ensure that a change of athlete uniform regulations can be implemented” — a change he said can only come down from the International Handball Federation.

For the time being, the European Handball Federation said this week that it donated the fine to “a major international sports foundation which supports equality for women and girls in sports.”

“Babysteps,” the team said in response. “We believe that a change is in motion.”