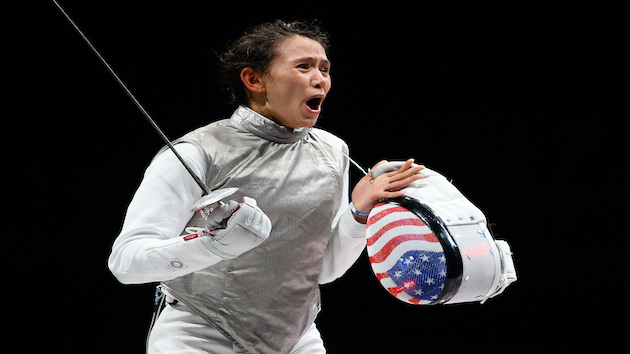 From fencing to taekwondo, swimming and more, the Summer Games in Tokyo have been a chance for American women to prove their athletic prowess.

Lydia Jacoby, 17, won the first gold medal for the U.S. women’s swimming team at the Tokyo Olympics with her upset win in the 100-meter breaststroke.

Jacoby became one of the youngest American swimmers to win an Olympic gold medal and the first-ever Alaskan swimmer to win Olympic gold.

Jacoby, who is from Seward, Alaska, moved to Anchorage earlier this year to train. She is the first Olympic swimmer, and only the 10th Olympian, to be born in Alaska, according to ESPN.

Jacoby’s hometown of Seward gathered to watch her race live, and erupted in cheers when she won.

“I was definitely racing for a medal. I knew I had it in me,” Jacoby said after the race. “I wasn’t really expecting a gold medal, so when I looked up and saw the scoreboard, it was insane.”

American Carissa Moore rode into the history books on July 27, becoming the first woman ever to win a gold medal in surfing at the Olympics.

The 28-year-old Hawaiian, the world’s No. 1 ranked woman surfer, burst into tears as she emerged from the water at Japan’s Shidashita Beach following her victorious performance on waves stoked up by Typhoon Nepartak swirling in the Pacific Ocean.

Moore’s win came after she bested South Africa’s Bianca Buitendag in the head-to-head finale of the inaugural surfing event at the Tokyo Games.

She was lifted on the shoulders of Team USA coaches as she wrapped herself in an American flag.

Jessica Parratto and Delaney Schnell won the silver medal in the women’s synchronized 10m platform competition, making them the first U.S. team to ever win medals in this event.

The teammates competed for just the third time together ever at the Olympics.

“Jess and I just ended up making it work,” Schnell said. “Took a lot of faith in each other, a lot of trust in each other that paid off.”

Lee Kiefer, 27, is a four-time NCAA champion at Notre Dame and a medical student at the University of Kentucky. On Sunday, Kiefer made history as the first American woman to win an Olympic gold medal in individual foil.

Kiefer was up against Inna Deriglazova of the Russian Olympic Committee, who is ranked No. 1 in the world. After the final point, the match ended with a score of 15-13. Kiefer ripped off her mask and shouted, “Oh my God!”

“It’s such an incredible feeling that I share with my coach, I share with my husband, with my family, just everyone that’s been a part of this,” Kiefer said. “I wish I could chop it up in little pieces and distribute it to everyone I love.”

Kiefer’s husband, Gerek Meinhardt, who is also a fencer and four-time Olympian, took to Instagram to share the moment with his followers.

“My wife just made my Olympic dream complete,” he wrote. “Words can’t describe how bad she wanted this, how hard she worked or how proud of her I am.”

For 18-year-old Anastasija Zolotic, winning a gold medal at the Olympics has been a goal of hers since she was 8.

“I want to be an inspiration for young girls and young athletes. Everything I wanted and worked so hard for. It’s like a legacy I’m leaving behind in a way. It’s everything I wanted,” Zolotic told “Good Morning America.” “Just seeing how far I should push myself through each match. It’s that little 8-year-old in me saying, ‘we can do this,’ pushing me through these matches.”

After her taekwondo match against Tatiana Minina of the Russian Olympic Committee, Zolotic told reporters that her same younger self “was running around the schoolyard saying I was going to be Olympic champion but she could never have imagined what this moment is like.”

Zolotic, who is from Florida, was aggressive in her first round and kept her powerful streak going. She ended up beating Minina with a score of 25-17.

She also has a unique way of preparing herself mentally before a match, letting out a loud primal scream before she puts her helmet on.

Zolotic is only the fourth American to reach an Olympic taekwondo final and only the second woman. The only athlete to take home the gold prior to Tokyo was Steven Lopez, who won the U.S. team’s only two previous Olympic golds.

“What a dream,” Zolotic said in an Instagram post following her win. “Making history each step of the way….. GO TEAM USA.”