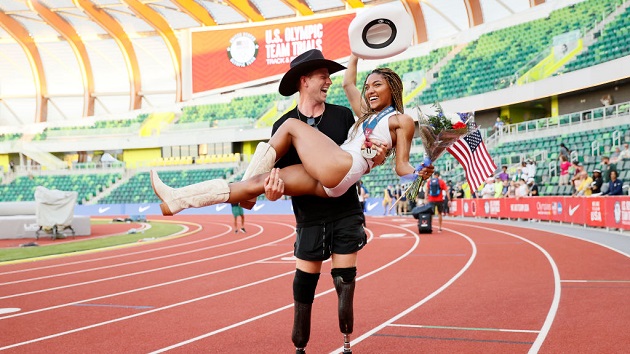 (TOKYO) — When U.S. Olympian Tara Davis competes in the long jump competition this weekend at the Tokyo Olympics, cheering her on from home will be her boyfriend, Hunter Woodhall.

When Woodhall, a two-time Paralympic medalist sprinter, competes in the Tokyo Paralympics next month, the roles will be reversed.

Davis and Woodhall, both 22, are used to achieving great feats, but each being in the Olympics in the same year is remarkable even for them.

“I’m so, so, so excited,” Davis told “Good Morning America.” “This is my dreams coming true.”

“For me, the most special part of going to the games is what all we fought through over these last years,” added Woodhall. “We’ve both seen exactly what it took to get to this point.”

They met in early 2017 at a meet in Idaho when both were seniors in high school — Davis in California and Woodhall in Utah.

“I was warming up and I spotted Hunter and I was like, ‘Oh, that guy is cute,"” recalled Davis. “I didn’t know who he was but I went up to him as he was coming off the track after his race and gave him a hug and we started talking.”

They stayed in touch and started dating several months later, but faced the obstacle of a long-distance relationship again when they each pursued their track and field careers in college.

Woodhall made history as the first double-amputee to get a Division I track and field scholarship, at the University of Arkansas.

Born with fibular hemimelia, in which the bones in his lower legs never formed, Woodhall had both amputated below the knee at 11 months old.

“I don’t think we’ve ever been closer than 700 miles from each other,” said Woodhall. “Learning how to do that [distance] is difficult.”

The coronavirus pandemic actually proved to be a respite for the couple, even though it delayed the Tokyo Olympics and Paralympics by one year.

Davis and Woodhall were able to live together while taking their college classes remotely, and prepare for the long road to Tokyo by each other’s side.

“I think the postponement of the Olympics helped me tremendously,” said Davis. “I’m very happy that I got that full year to find out who I am, reset my brain and get back focused into what I love to do.”

In June, Woodhall made the U.S. Paralympic team and then flew from his trials in Minneapolis to Eugene, Oregon, where Davis was competing for a spot on the U.S. Olympic team.

“I finished my race and left from the track for a flight to Eugene,” said Woodhall, who made it in time to see Davis earn a spot. “That moment of cognition right after she realized she made the team was one of the most memorable things that I’ve ever experienced.”

Now, Davis and Woodhall will both compete at Olympic Stadium in Tokyo, just weeks apart.

“The biggest thing that we’ve talked about is just understanding at the end of the day that it’s just a track meet,” said Woodhall of how he is helping Davis prepare mentally for her first Olympics. “It’s a really amazing experience and it’s important to soak it all in, but at the end of the day it’s a track meet and it’s our job and we will compete at the highest level we can.”

And both Davis and Woodhall said that they are looking forward as much to their post-Olympics life as they are to the event itself.

They will both officially graduate from college after they return from Tokyo, and then plan to live together full time for the first time in their relationship, in Fayetteville, Arkansas.

Davis and Woodhall each turned pro earlier this month, with both signing endorsement deals with Champion.

“Arguably, post-Olympics is more life-changing than pre-Olympics, which I don’t think is usually the case,” said Woodhall.

“I’m really excited to start a new chapter of my life and finally turn our dreams into reality,” said Davis.