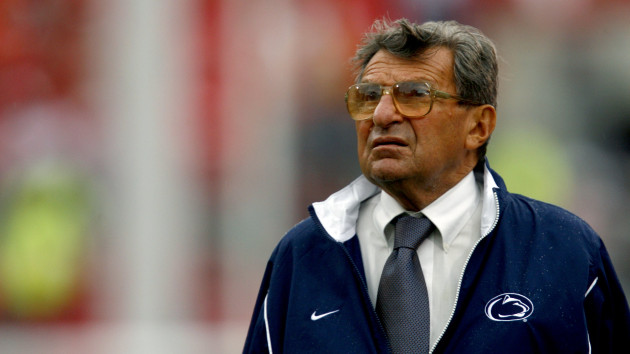 (NEW YORK) — Penn State University rose to national prominence in large part because of football and one man: Joe Paterno.

Paterno was the head coach of the Penn State Nittany Lions from 1966 to 2011. With 409 wins, Paterno stands as the most victorious coach in NCAA Division 1 Football history.

Yet the nearly 46,000 students who fill the campus of Penn State University today would see very little evidence of the legendary coach. There are no statues, no celebrations and, out of the hundreds of buildings on campus, Paterno’s name remains only on the library.

A decade ago, all signs of Paterno had been erased after former Penn State assistant coach Jerry Sandusky was charged with multiple child sex abuse allegations. A new ESPN E60 documentary The Paterno Legacy examines Paterno’s storied and sullied career.

“Some of those assaults allegedly occurred while Sandusky was a coach at Penn State, while others happened on the Penn State campus and elsewhere after Sandusky had retired from his coaching position,” said former Attorney General Linda Kelly.

On Nov. 5, 2011, after more than three years of investigation, Sandusky was charged with 52 counts of sexually molesting eight boys from 1994 to 2009. In 2012, he was convicted of the sexual abuse of 10 boys during that time and was sentenced to 30 to 60 years in prison. He maintains his innocence.

Sandusky was an assistant on Paterno’s staff for 32 seasons, but had retired in 1999 to dedicate himself to a non-profit he’d founded to help at-risk children, The Second Mile. It was there where Sandusky had allegedly met his victims and, according to state prosecutors, Sandusky was enabled by some of the most powerful men at Penn State.

“Athletic Director Tim Curley and Vice President of Business and Finance Gary Schultz, their inaction likely allowed a child predator to continue to victimize children for many, many years,” said Kelly.

“It then became a university issue,” said Spanier. “And, of course, because Jerry Sandusky had been a coach and was allied in the public’s thinking with Penn State, then it became a Joe Paterno story.”

According to prosecutors, Paterno had been approached by a former graduate, assistant coach Mike McQueary, who told him about an incident that he had witnessed while inside the Penn State football facility in 2001. McQueary said when he went to the locker room after hours, he had heard what seemed like sexual sounds coming from the shower, and saw a young boy, naked, being sexually assaulted by Sandusky.

According to Jay Paterno, Joe Paterno’s son, McQueary had reported the incident to Joe Paterno.

“Whatever Mike told him, Joe then went to follow the university policy, follow state law and reported it up the chain, which is exactly what he’s supposed to do. And all that he’s allowed to do,” said Jay Paterno.

Prosecutors obtained an email exchange shortly after the shower incident was brought to Paterno’s attention. Spanier, Schultz and Curley discussed reporting the incident to the proper authorities, but ultimately decided not to report it at all.

Both Schultz and Curley have said they regret the decision to not report it at the time.

“Well, my biggest regret is that we didn’t turn it in for the department of welfare to investigate it. I think that’s what we should have done,” said Schultz.

At the time, Paterno was not accused of any wrongdoing, but he did become the focus of the public and the media. Many were angry with the head coach for not going to the police.

Paterno died at the age of 85 in 2012, the same year that the NCAA vacated all of Penn State’s wins from 1998 through 2011 as punishment for the program’s lack of action. Three years later, the NCAA agreed in a settlement to restore Paterno’s 111 wins between 1998 and 2011.

Former player Matt Millen played for Penn State and Sandusky. He said that learning about the incident felt “visceral” and he was deeply disappointed that Paterno didn’t use his considerable power to do more.

“This is more than a football legacy. This is about people,” said Millen. “And if we can’t protect our kids we, as a society, are pathetic.”