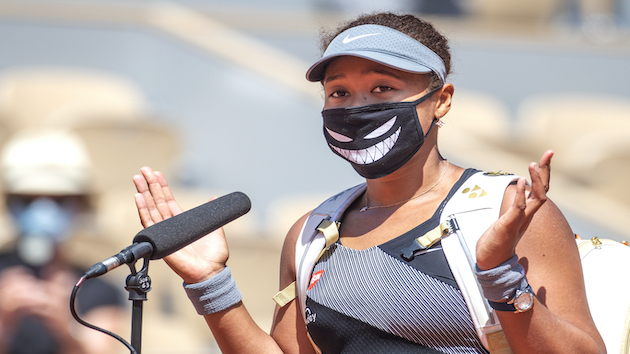 (PARIS) — The French Open has announced it has fined Naomi Osaka $15,000 for failing to speak to the media following her round one win on Sunday and that she could be defaulted if she continues.

Osaka, the second seed, defeated Patricia Maria Tig 6-4, 7-6 (4). She spoke on the court following her win.

In a joint letter from the heads of the French Open, Australian Open, US Open, and Wimbledon, the four  said the ruling was a matter of fairness.

“We want to underline that rules are in place to ensure all players are treated exactly the same, no matter their stature, beliefs or achievement,” said the letter. “As a sport there is nothing more important than ensuring no player has an unfair advantage over another, which unfortunately is the case in this situation if one player refuses to dedicate time to participate in media commitments while the others all honour their commitments.”

Last Wednesday, Osaka announced on social media she would not participate in post-match interviews.

“I’ve often felt that people have no regard for athletes’ mental health and this rings very true whenever I see a press conference or partake in one,” she wrote. “We’re often sat there and asked questions that we’ve been asked multiple times before or asked questions that bring doubt into our minds and I’m just not going to subject myself to people that doubt me.”

Following her announcement, Roland-Garros asked her to reconsider her position and attempted to speak with the four-time Grand Slam winner to check on her well-being and to learn more about her position.

The Grand Slam tournaments then wrote Osaka to check on her well-being collectively and to “offer support, underline their commitment to all athletes’ well-being and suggest dialog on the issues.”

“The mental health of players competing in our tournaments and on the Tours is of the utmost importance to the Grand Slams,” said the letter.

The Grand Slams said they have resources to help players.

“In order to continue to improve however, we need engagement from the players to understand their perspective and find ways to improve their experiences,” said the letter. “Every year we seek to deliver better experiences to our fans, our players and our people, and we have a long and successful track record in achievement on this count.”

The tournament’s told Osaka that if she continues to refuse to speak to the media she could face tougher sanctions, including a default from the tournament and a major offense investigation that could lead to larger fines and possible suspensions from future Grand Slams.