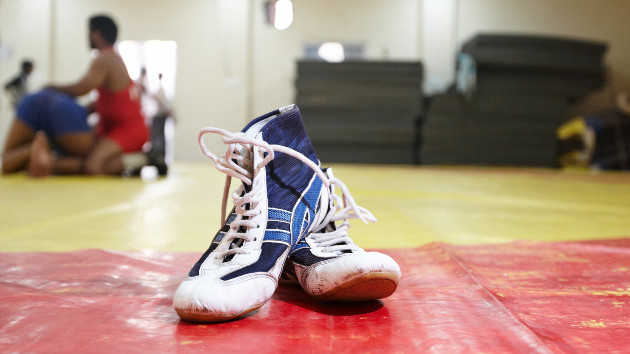 (NEW YORK) — A Virginia high school wrestler is proving that any dream is achievable through hard work and dedication.

Adonis Lattimore, 17, was born without a right leg, a partial left leg and only one fully functioning arm. Despite doubts from his peers throughout his life, Lattimore won Virginia’s Class 6 106-pound wrestling championship, capping off his high school career in a major way.

“That feeling when it finally pays off is the best feeling in the world,” Lattimore told ABC News’ Good Morning America.

Lattimore’s wrestling career began in elementary school when his dad found a flyer advertising a local wrestling club in Virginia Beach and brought him to a practice. He was hooked and knew he wanted to continue in the sport.

“After that, I never stopped going. I guess what kept me there was the competitive atmosphere it brung and the friends I was meeting on the way,” he said.

At times, others would judge his outward appearance, but he didn’t let any negativity or doubts from peers weaken his drive.

During his freshman year at Landstown High School, Lattimore was a regional qualifier. But when the pandemic struck during his junior year, all of the regional meets were canceled.

Though he faced hardships at times, Lattimore remained focused on his technique and never once thought about giving up.

“I actually had a losing steak before I got to high school … but I never thought about quitting. I just thought about getting better. I saw subtle improvements and eventually I got to the point where I could actually compete,” he said.

In March, the high school senior took to the mat for what would be his last regional match. Though he was filled with adrenaline, he remained focused for each of the three-minute wrestling periods.

Then came the moment he worked so hard for. His name was announced on the loudspeaker as the 2022 state champion.

“I cried a little bit,” Lattimore said about hearing the entire arena erupt in cheers after he knew that he had won. “I watched so many finals from the stands or just from videos and to actually be the one to win it was a pretty surreal feeling.”

In a now-viral moment, his father, Jerrold, could be seen running onto the mat to embrace his son with an enormous hug.

“Against all the doubt and odds, he did it,” Jerrold said. “I repeatedly said ‘I believe in you’ to Adonis when we were hugging each other once he won.”

Lattimore is now planning on heading to college to continue wrestling and pursue a degree in computer science. Through his journey, he hopes to inspire other young athletes to enjoy the ride and do whatever they’re passionate about.

“Put everything you have into doing [what you love],” he said.