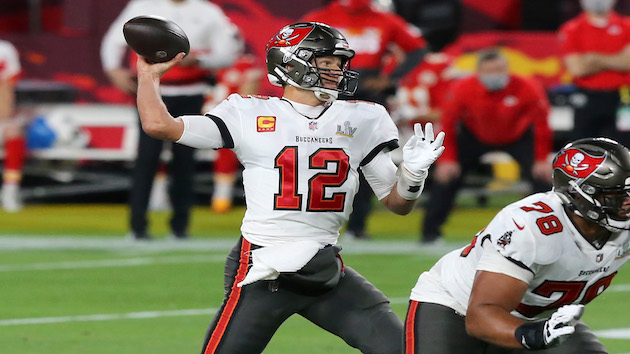 (TAMPA BAY, Fla.) — Tampa Bay Buccaneers quarterback Tom Brady played the 2020 NFL season with a torn medial collateral ligament in his left knee, according to a report from the Tampa Bay Times.

Brady led the Bucs to the Super Bowl victory in February over the Kansas City Chiefs.

The paper says Brady suffered the injury during his final season with New England.

Brady declined to give specifics on the injury in June.

“It was an injury I dealt with really since last, you know, April, May,” said Brady, after Tampa Bay’s mandatory minicamp. “I knew I would have to do something at the end of the year, and happy I did it, and it was probably something that certainly needed to be done, and there was a great outcome, so I’m very happy about that.

The Tampa Bay Times said the injury got worse during the season, but Brady never appeared on an injury report. He did miss one practice a week towards the end of the season, according to the paper.

“[I’m] really happy with my rehab process,” said the Super Bowl MVP. “It’s been great communication. Alex [Guerrero] – Brady’s trainer – and I have worked really hard at trying to get back to full speed to get [back] to what I need to do to begin to improve.”

Brady tore his anterior cruciate ligament in the same knee in 2008 while playing for New England.

The 43-year old threw for 4,633 yards and 40 touchdowns last season while leading the Buccaneers to an 11-5 regular-season record.