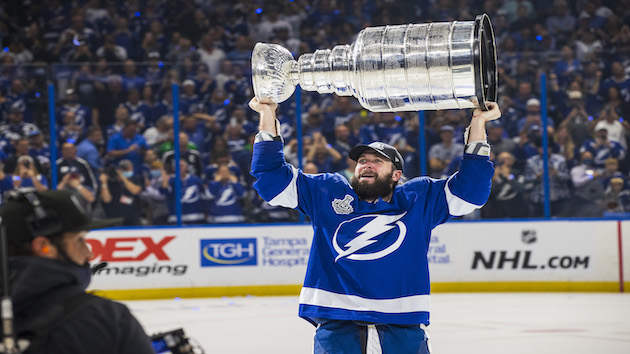 Kucherov sustained a non-displaced rib fracture after a cross-check against the New York Islanders in the semi-final round, according to BriseBois.

“He played with a flak jacket from that point on and also had a nerve block injection the day before every game,” said BriseBois. “It makes his performance during these playoffs both before the injury and post broken rib all the more impressive.”

Kucherov led the playoffs with 32 points on eight goals and 24 assists.

The star wasn’t the only player dealing with an injury during the playoffs. Defenseman Victor Hedman played with a torn meniscus while forward Barclay Goodrow and defenseman Ryan McDonough played with broken hands, according to the GM.

Forward Alex Killorn broke his leg blocking a shot in game 1 of the final before have a rod put in his leg a few days later. Two days after the surgery he was already back skating with the hope of playing.

“That’s how you win a Stanley Cup,” said a choked-up BriseBois. “All the competing through injury, it was outstanding and so inspiring to watch on a game-in, game-out basis.”