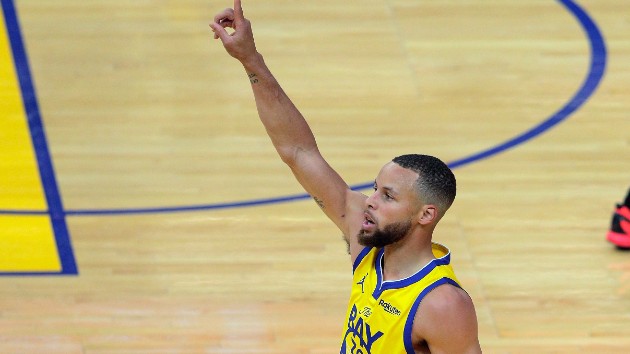 (SAN FRANCISCO) — Golden State Warriors’ Stephen Curry has been hot on the court lately — especially beyond the arc. In fact, the 33-year-old point guard set a new NBA record Sunday night for the most 3-pointers in a calendar month.

Curry dropped seven 3s during Sunday’s 117-113 win against the Sacramento Kings, racking up 85 3-pointers for the month of April. With those buckets, Curry snapped the previous record of 82 that was set by James Harden in November of 2019 when he was a member of the Houston Rockets. And he will have a chance to add to his record as the Warriors still have two more games to go this month.

So far in April, Curry has been averaging 38.2 points per game and is shooting 52.9% from the field and 47% from beyond the arc, according to ESPN.

He has already hit two other milestones this month: passing Wilt Chamberlain as the Warriors’ all-time leading scorer, and becoming the first player in the league’s history age 33 or older to score at least 30 points in 11 consecutive games.