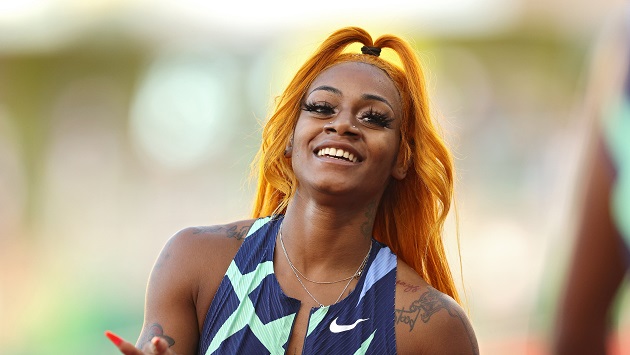 (INDIANAPOLIS, Ind.) — Sprinter Sha’Carri Richardson will officially not be running at the Tokyo Olympics.

On Tuesday, the U.S. Olympic track and field team released its roster for the games, which featured a handful of veterans and 81 first-time Olympians — but not Richardson.

In June, Richardson won the 100 meters at the U.S. Olympic trials in Eugene, Oregon, making her the fastest woman in America and positioning her to compete for the gold in Tokyo. However, her chances of participating in the 100 meters at the Olympics were erased last week after it was announced she had tested positive for THC, a chemical found in marijuana.

Richardson accepted a 30-day suspension from the U.S. Anti-Doping Agency for the violation, which would end on July 27 — in time for her to run in the women’s 100-meter relay in Tokyo beginning Aug. 5. But the runner ultimately was not offered a spot on the Olympic team.

“We are incredibly sympathetic toward Sha’Carri Richardson’s extenuating circumstances and strongly applaud her accountability — and will offer her our continued support both on and off the track,” USATF said in a statement following their decision to leave Richardson off the Olympics team.

“While USATF fully agrees that the merit of the World Anti-Doping Agency rules related to THC should be reevaluated, it would be detrimental to the integrity of the U.S. Olympic Team Trials for Track & Field if USATF amended its policies following competition, only weeks before the Olympic games,” USATF added, saying that all USATF athletes must adhere to the current anti-doping rules.

“Our heartfelt understanding lies with Sha’Carri,” USATF said. “We must also maintain fairness for all of the athletes who attempted to realize their dreams by securing a place on the U.S. Track & Field Team.”

Richardson’s win at the Olympic trials came after her biological mother died a week earlier.

“Last week, finding out my biological mother passed away and still choosing to pursue my dreams — nobody knows what I go through,” she told reporters at the time.

Richardson has the second-fastest 100-meter dash in the world this year, behind Jamaican Shelly-Ann Fraser-Pryce.

Jenna Prandini, who also qualified in the 200 meters, will take Richardson’s spot in the 100 meters and Gabby Thomas, also a 200-meter runner, was named to the final spot on the 4×100 team.

In an interview with NBC last week, Richardson spoke out about her failed drug test and apologized, saying she didn’t know how to deal with her emotions.

“Don’t judge me, because I am human,” Richardson said. “I just happen to run a little faster.”