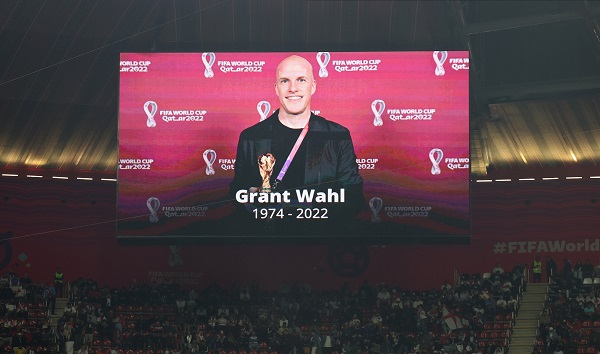 (NEW YORK) — U.S. soccer journalist Grant Wahl’s body has been returned to the U.S., following his unexpected death last week while covering the World Cup in Qatar, according to his brother.

His brother, Eric Wahl, tweeted Monday that he was in New York with his brother’s body and was headed to the medical examiner for an autopsy.

“Please keep Celine in your thoughts. She & her mother & sisters have gone to make the I.D. I couldn’t do it, for my own sanity,” Eric Wahl tweeted.

Grant Wahl, 49, was covering his eighth World Cip when he “fell ill” while in the Lusail Stadium media section during the quarter-final match between Argentina and the Netherlands, according to a spokesperson for the Supreme Committee for Delivery & Legacy, the Qatar World Cup organizing committee.

The spokesperson said Grant Wahl received medical treatment on-site before being transferred to an area hospital by ambulance.

Two days before his death, the journalist said on his podcast, “Fútbol with Grant Wahl,” that he had bronchitis and went to the medical clinic twice on Thursday, saying he felt better but wasn’t 100% back to normal.

“I’m feeling better today. I basically canceled everything on this Thursday that I had, and napped and I’m doing slightly better but you can probably tell in my voice that I’m not at it at 100% here. Hopefully I will not cough during this podcast. I’m coughing a lot,” he said.

Last week, U.S. Soccer remembered Grant Wahl, saying, “fans of soccer and journalism of the highest quality knew we could always count on Grant to deliver insightful and entertaining stories about our game, and its major protagonists: Teams, players, coaches, and the many personalities that make soccer unlike any sport.”