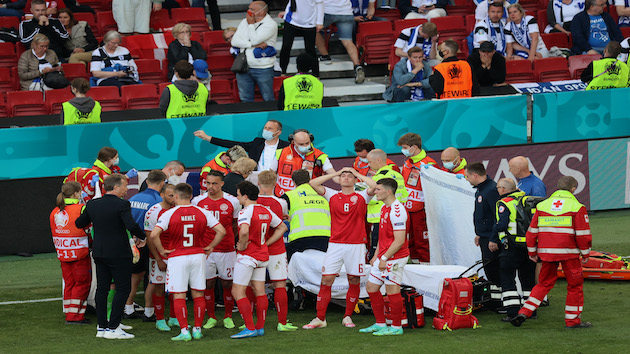 Danish soccer star Christian Eriksen has sent ‘his greetings’ to his teammates and has been reported to be in stable condition after collapsing on field during a Euro 2020 match Saturday, officials said.

The latest developments were announced by the Danish Football Association on Twitter early Sunday morning.

“This morning we have spoken to Christian Eriksen, who has sent his greetings to his teammates,” the statement read. “His condition is stable and he continues to be hospitalised for further examination. The team and staff have received crisis assistance and will continue to be there for each other after yesterday’s incident. We would like to thank everyone for the heartfelt greetings to Christian Eriksen from fans, players, the royal families from both Denmark and England international associations, clubs etc. We encourage everyone to send their greetings to the Danish FA, where we will make sure they are all passed on to Christian and his family.”

Eriksen, 29, a midfielder for Denmark’s national team, had a medical emergency about 40 minutes into a match against Finland. His teammates surrounded him on the pitch while CPR was performed during a live broadcast.

Eriksen was taken to a nearby hospital, where he was stabilized, according to the Union of European Football Associations, which organizes the international men’s soccer championship.

He was awake and awaiting further examination at the hospital, the Danish Football Association said in a statement about 30 minutes after the incident.

The match has been suspended due to a medical emergency which involved Denmark’s Christian Eriksen. The player in now in hospital and in a stable condition.

UEFA wishes Christian Eriksen a full and speedy recovery and wishes to thank both teams for their exemplary attitude.

Officials suspended the game, which was held in Copenhagen on the second day of the tournament, before UEFA agreed to resume play at 8:30 p.m. local time “following the request made by players of both teams.”

The last four minutes of the first half were played, followed by a five-minute break before the second half started. Joel Pohjanpalo scored the game’s only goal, in the 59th minute, to give Finland a 1-0 victory despite Denmark dominating possession with 70%.

“UEFA wishes Christian Eriksen a full and speedy recovery and wishes to thank both teams for their exemplary attitude,” the association said on social media.

“Moments like this put everything in life into perspective,” Čeferin said. “At these times, the unity of the football family is so strong and he and his family carry with them the good wishes and prayers of everyone. I heard of fans of both teams chanting his name. Football is beautiful and Christian plays it beautifully.”

The men’s football championship, held every four years, was delayed a year due to the coronavirus pandemic. The tournament runs June 11 to July 11, with matches in 11 cities in 11 countries.