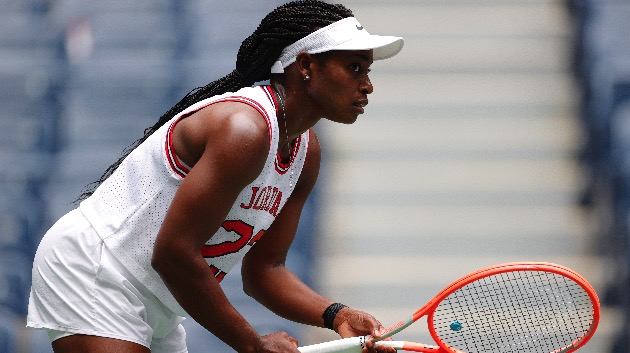 (NEW YORK) — Tennis star Sloane Stephens is opening up about mental health ahead of the 2021 U.S. Open.

Mental health for athletes at the top of their game has been brought to the forefront in 2021, largely due to athletes like Naomi Osaka and Simone Biles opening up on their own struggles.

“It’s important because no one says that it’s OK to say how you feel. And I think now it’s becoming a big deal,” Stephens, 28, told “Good Morning America” at a Mercedes event in Manhattan.

Osaka pulled out of the French Open in May after she announced she would not be speaking to the press at mandatory post-match press conferences due to mental health concerns. Osaka, the world’s No. 2 player, was fined $15,000 for each missed press conference before dropping out of the tournament.

“I’ve often felt that people have no regard for athletes’ mental health and this rings true whenever I see a press conference or partake in one,” Osaka wrote on Twitter on May 26.

In wake of Osaka’s call to action for tournaments to prioritize players’ mental health, the U.S. Open announced measures to support players and their mental health including plans to have licensed mental health providers and consultants on site for the tournament. But they will not be changing their mandatory press conference rule.

Stephens, who won the U.S. Open in 2017 and has been playing professional tennis for over a decade, is now one of the many athletes who is speaking out about mental health and sharing her experiences with others.

“I feel like a lot of people try to fight it alone and end up in a deeper rut than they were in before because they didn’t ask for help, or they didn’t tell anyone or they didn’t even say it out loud.” Stephens said. “I wouldn’t wish that. I’ve been in a place where it’s been dark. And it’s been deep, and it’s been sad. And I’m like, I need to get out of that place.”

Making mental health about you

Ahead of what Stephens calls “biggest events” in tennis, the tennis star says her mental health is just as much of a priority as her physical health.

“I think that a lot of people from the outside, especially as an individual athlete who feels a lot of pressure and has a lot of anxiety and things like that when it comes to their sport… make decisions based on like, ‘Oh, they’re going to say this about me,’” Stephens shared.

“Kind of getting out of that space and being like I know it’s about me,” Stephens continued. “Realizing that my life, my choices, and my decisions really shouldn’t be based on other people.”

Mental health and the pandemic

Stephens, like many professional athletes, has had to undergo strict COVID-19 protocols for the past year in order to play at an elite level. Playing in international tournaments often means quarantining in hotel rooms for weeks at a time and having to make adjustments to your usual workout and preparation schedule.

“When we were playing in bubbles and all that stuff, it was super restricting,” she said.

Now that COVID-19 restrictions have eased, Stephens says she makes sure to take time for herself and appreciate the things she wasn’t able to do a year ago.

“I’ve made sure now that I’m going to enjoy my food, I’m going to go for walks, and I’m going to make sure that I’m taking care of myself,” Stephens said. “You always have to have something to keep yourself sane and I think for me finding small things has been very helpful.”

Over the course of her career, Stephens said she has learned how to prioritize her mental health and offered mental health advice for younger athletes.