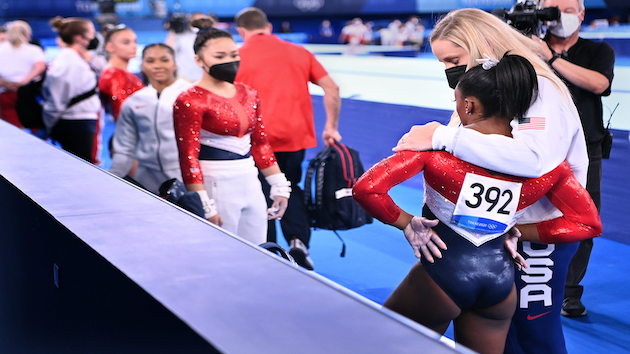 (TOKYO) — Simone Biles’ shocking withdrawal from the team competition at the Tokyo Olympics Tuesday put a spotlight on mental health and the extreme stress elite athletes like Biles are under.

The U.S. women’s gymnastics team won silver in the team competition after Biles left the competition early following a rare stumble on vault.

USA Gymnastics said in a statement that Biles, 24, withdrew “due to a medical issue,” which the gymnast later confirmed was not a physical injury.

“No injuries, thankfully, and that’s why I took a step back because I didn’t want to do something silly out there and get injured,” Biles said in a press conference following the competition. “So I thought it was best if these girls took over and did the rest of the job, which they absolutely did.”

Biles, aiming to win an unprecedented six gold medals in Tokyo, told reporters Tuesday this Olympics, her second, has been “really stressful.”

The Tokyo Olympics are taking place under strict restrictions due to the coronavirus pandemic, including no fans in the stands and no family members or friends of the athletes allowed to attend. The Games were also postponed one year due to the pandemic.

“I truly do feel like I have the weight of the world on my shoulders at times,” Biles posted on Instagram after the qualifying event. “I know I brush it off and make it seem like pressure doesn’t affect me but damn sometimes it’s hard hahaha! The olympics is no joke!”

Biles has qualified to compete in individual events later this week, but it remains to be determined if she will compete.

“We’re going to take it a day at a time,” she said Tuesday. “I know tomorrow that we have a half day or at least the morning off, so it will be a good mental rest and so we will take it from there.”

Biles’ comments on the emotional toll the Olympics have taken on her came as tennis superstar Naomi Osaka was eliminated from the Games after losing a third round match in straight sets.

Osaka, who took a months-long break from tennis due to what she said were mental health struggles, also spoke about the pressure she felt at the Olympics.

“I definitely feel like there was a lot of pressure for this,” Osaka said after her loss, adding, “I feel like my attitude wasn’t that great because I don’t really know how to cope with that pressure, so that’s the best that I could have done in this situation.”

Earlier this year, another Olympic athlete, Simone Manuel, revealed a burnout diagnosis after a loss at the U.S. Olympic swimming trials, saying her body had, in her words, “completely crashed.”

Swimmer Michael Phelps, a 28-time Olympic medalist, has also been open about his mental health struggles, revealing he suffered from depression at even the height of his career.

Valorie Kondos Field, former longtime head coach of the UCLA Women’s Gymnastics team, said she hopes that athletes like Biles, Phelps, Osaka and Manuel speaking out about mental health opens the conversation on the type of pressures they face.

“You don’t just have the weight of America wanting you to win gold, you have infinitely more sponsorships than any other athlete,” Kondos Field told “Good Morning America.” “And then on a personal level you have your team and wanting to do well for your teammates.”

“It’s easy for us to put celebrities on that level on a different plane and say, ‘They brought it on themselves. They wanted it all,"” she said. “I hope that we as humans tap into our humanity and understand that all of these Olympians are people. They’re real people with real emotions and real feelings and real pressure.”

Kondos Field described how different it is for an athlete to experience a mental health issue compared to a physical injury.

“With a physical injury, you can see it and feel it and you know what’s wrong,” she said, noting that the adrenaline that comes with physical injuries can also power athletes to continue competing. “With a mental health issue, there’s no X-ray, like with a torn ACL, that can show us what’s going on.”

“And with mental stress, the concern I’ve always had is nobody really knows the layers that have compounded to get [an athlete like] Simone Biles to this level,” Kondos Field added. “She’s had to compartmentalize so much more than any of us know. It’s not just the game or the stress of being at the top of your game, it’s everything else that we don’t know.”

Kondos Field, who went viral in 2019 with a TED Talk titled, “Why winning doesn’t always equal success,” said Biles should be commended for putting herself and her teammates first.

“You’ve got to believe in your team and I know that Simone has always shown support and believed in her teammates,” said Kondos Field. “It probably would have been a different result had she competed, but in that moment she didn’t feel that she could, and nobody can question the validity of that. That is her truth.”

“It was simply on that given day she felt that her teammates were going to be able to perform better than she could,” she said, noting that in gymnastics, competing not at the top of your game can result in severe injury.

Kondos Field added that she hopes Biles’ example sends a message of self-reliance and self-truth to people, including young athletes with hopes of reaching the Olympics one day.

“I think it’s a message to all of us that regardless of what people will say about us, if you can’t rely on yourself to take care of yourself, then you’re allowing other people to assume your truth and what’s going on really deep inside you,” she said. “I always invite young girls to be your own best friend, to take time to pause and really understand what’s going on inside of you regardless of what anyone is going to say.”