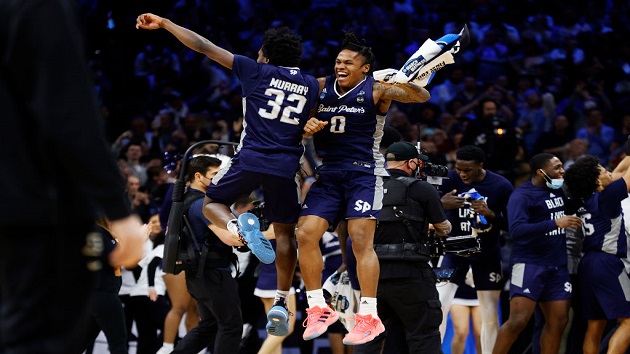 (NEW YORK) — The Elite Eight of the men’s NCAA tournament is set and will feature some of the biggest and storied programs in college basketball history — Duke, North Carolina, Villanova and Kansas.

But there’s a tiny Jersey City, New Jersey, university that also punched its ticket to the next round of eight you probably never heard of until they knocked off No. 2 Kentucky and No. 7 Murray State.

The Cinderella magic continued for the Saint Peter’s University Peacocks on Friday night, stunning third-seeded Purdue 67-64 in front of a packed crowd at Wells Fargo Center in Philadelphia.

The victory was historic, marking the first time a No. 15 has ever advanced to the Elite Eight of the NCAA tournament.

The Peacocks have galvanized this year’s tournament, which comes after two years of the COVID-19 pandemic that saw the tournament canceled altogether in 2020, and a carefully coordinated one last year, anchored in Indianapolis.

But the crowds are back in full force this year, and all eyes are on the small university that sits just across the water from New York City’s lower Manhattan.

What some are saying is most impressive about Saint Peter’s success is like most mid- and low-major programs, the funding and resources are far below that of the likes of Kentucky, a team they upset this year.

And budget constraints directly affect areas such as recruiting, whereas most programs like Saint Peter’s end up with players the majors typically overlook.

But for the Peacocks, the collective appears unphased.

“I got guys from New Jersey and New York City. You think we’re scared of anything?” Coach Shaheen Holloway said during a post-game press conference when asked about the physicality of Murray State last week.

The historic March Madness run continues Sunday when the Peacocks face-off against No. 8-seeded North Carolina in the East regional final, with a chance to reach the Final Four in New Orleans.

“What they going to say now?” Coach Holloway said about the team’s underdog status after defeating Purdue Friday night.