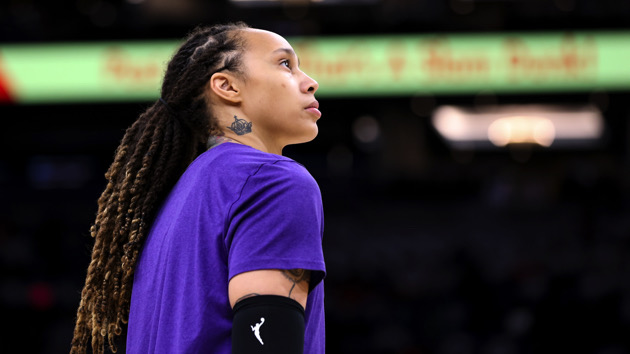 (MOSCOW) — A court in Russia has extended the pre-trial detention for WNBA star Brittney Griner.

Griner, who was detained in February, will remain in custody at least through July 2, according to Russian state media outlet TASS.

The 31-year-old was taken into custody at Sheremetyevo International Airport, near Moscow, on Feb. 17 after officials allegedly found vape cartridges with hashish oil in her bag. Hasish oil is illegal to possess in Russia.

Her detention was extended for another 18 days at “the request of the investigation,” according to a representative from the Khimki Court of the Moscow Region, per TASS.

Griner has been detained in a Russian prison for 117 days, more than three months. She was visiting Russia in February to play basketball for the Russian Premier League team UMMC Ekaterinburg during the offseason when she was arrested at Sheremetyevo International Airport near Moscow for allegedly having vape cartridges in her luggage that contained hashish oil — an illegal substance in Russia.

She was charged with “large-scale transportation of drugs” and could face up to 10 years in prison, according to The New York Times.

The U.S. government classified Griner’s case on May 3 as “wrongfully detained” in Russia, which means that the U.S. would work to negotiate her release.

Griner’s wife, Cherelle Griner, told GMA co-anchor Robin Roberts last month that the support her wife has received from the league has brought the WNBA star “comfort” amid her detention.

The WNBA, which kicked off its 2022 season on May 6, is honoring Griner with a floor decal bearing her initials and jersey number (No. 42) on the sideline of all 12 WNBA courts.

“Things like that matter, like, it has her hopeful,” Cherelle Griner told Roberts. “It lets her know she’s not forgotten.”

“Those small moments, I know, give her some type of hope,” she added.
WNBA star Brittney Griner’s pre-trial detention in Russia extended as US works to negotiate her release

Russia’s invasion of Ukraine began one week after Griner was detained on Feb. 17. Some officials are concerned that Americans jailed in Russia could be used as leverage in the ongoing conflict.

Cherelle Griner said that she would like to speak with President Joe Biden.

“I just keep hearing that, you know, he has the power. She’s a political pawn,” she said. “So if they’re holding her because they want you to do something, then I want you to do it.”

State Department spokesperson Ned Price said last month that a U.S. consular officer was able to meet with Griner on May 19.

Price said the officer “found her continuing to do as well as could be expected under these exceedingly challenging circumstances.”

“But again, our message is a clear and simple one — we continue to insist that Russia allow consistent and timely consular access to all U.S. citizen detainees,” he added. “One-off visits are not sufficient, and we will continue to call on Moscow to uphold its commitments under the Vienna Convention for consistent and timely access, as well.”
WNBA Players Association president says Brittney Griner is detained in Russia ‘because of a gender issue’

The Phoenix Mercury said Monday the team and coaching staff had met with State Department officials and Reps. Sheila Jackson Lee, D-Texas, and Greg Stanton, D-Ariz., while they were in Washington, D.C.

“We’re here to do whatever we can to amplify and keep BG at the forefront, which is more important than any basketball game and anything else that’s going on in our lives,” Mercury star and longtime teammate Diana Taurasi said in a statement following the meetings. “We want BG to come home as soon as possible, it’s number one on our list.”

Cherelle Griner said she hadn’t spoken to Brittney since just after her arrest since her cellphone was confiscated, but she has corresponded in a few letters.