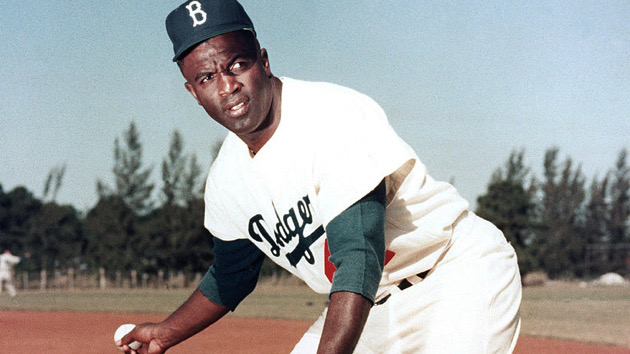 (NEW YORK) — Seventy-five years ago, Jackie Robinson debuted as a first baseman with the Brooklyn Dodgers while donning jersey No. 42. Stepping out of the dark dugout into the stadium’s bright lights, the 28-year-old rookie played in front of a crowd toppling more than 26,000 fans at Ebbets Field.

Today, fans and franchises around the league are still remembering his immeasurable contributions to America’s pastime after shattering racial barriers in the sport of baseball.

Commissioner of Baseball Rob Manfred Jr. said Robinson, the first Black baseball player in major league history, “took the field under incredibly challenging circumstances and unimaginable pressure.” Through his courage, character, skill and values, Manfred said in a statement to ABC News he believes “he brought well-needed change to our game and advanced the Civil Rights Movement in our country.”

“Our family is thrilled to see the many wonderful tributes to Jack’s historic moment 75 years ago,” Rachel Robinson, founder of the Jackie Robinson Foundation and 99-year-old widow of the beloved barrier-breaking professional baseball player, told ABC News in a statement.

David Robinson, 69, who sits on the Jackie Robinson Foundation’s board of directors, reflected on growing up as the youngest child in the family, in an interview with ESPN’s Jackie to Me, a 10-episode documentary series, which is a part of the season-long Jackie 75 special project to commemorate the historic diamond anniversary.

“Being a father was important to him. And so, every opportunity he got, he would take his children by the hand or the shoulder and try to show them life,” Robinson said in a statement to ABC News, recalling memories from the March on Washington in August 1963, “with his arm around me, leading me in front of that march to say — without words, ‘This son, is part of your inheritance.’”

Manfred said it’s a top priority to honor the National Baseball Hall of Fame inductee and “recognize the impact Rachel has made through the Jackie Robinson Foundation, and continue to keep Jackie’s memory and values alive for today’s generation of players and fans.”

In 1997, the league retired his iconic jersey number. And the MLB acknowledges April 15 of each year as Jackie Robinson Day, dating back to 2004.

The annual event is the only time when Robinson’s number is worn by on-field personnel. It’s a popular way for teams to pay homage to the trailblazing athlete, a tradition that started in 2009.

But, for the first time, major league players, coaches, managers and umpires will wear No. 42 in Dodger blue on Jackie Robinson Day.