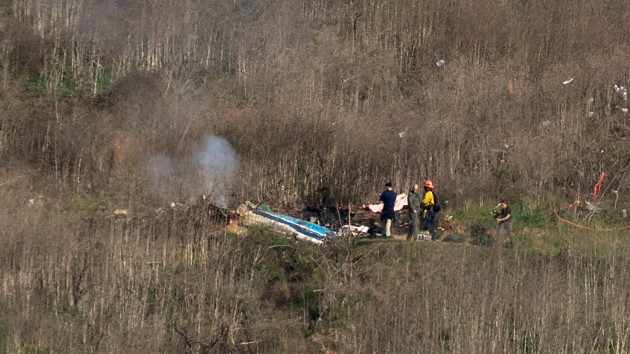 (NEW YORK) — Federal investigators on Tuesday said the helicopter carrying Kobe Bryant, his daughter and seven others, including the pilot, crashed last January when the pilot became disoriented after flying in thick fog.

The pilot did not follow training, violated visual flight rules and was unable to differentiate between up and down, investigators found.

The pilot, Ara Zobayan, was flying under Visual Flight Rules, meaning he needed full visibility. Instead of diverting the Jan. 26, 2020, flight to a nearby airport, Zobayan continued the flight into dense clouds, the National Transportation Safety Board (NTSB) said. The investigators said he tried to climb out of the cloud cover but instead turned left and descended, slamming the helicopter into nearby hills.

Bryant and their close family friends were headed to a basketball game at Bryant’s Mamba Sports Academy on the day of the crash.

Zobayan had been employed by Island Express Helicopters since 2011, logging about 8,500 hours of pilot-flying time. He had been flying in the area of the crash for a decade and often flew Kobe Bryant.

Zobayan reportedly told air traffic control they were “climbing” to 4,000 feet, when in reality the aircraft was falling, according to the NTSB.

“The scenario we believe happened is that he is flying along, he realizes he’s getting boxed in with visibility, and he must have made the decision that I’m going to punch up through these clouds and get on top,” NTSB chairman Robert Sumwalt said.

Board members said the crash could have been prevented and the pilot “went contrary to his training.”

The Los Angeles Police Department had grounded its own fleet of helicopters the morning of the crash due to poor visibility. One eyewitness described the fog as “like jumping into a pool of milk.”

Zobayan sent a text message the morning of the crash, saying, “Weather looking ok” after expressing concerns the day before that the flight may not take off due to poor conditions. Zobayan frequently piloted flights for Bryant and “likely did not want to disappoint him” the NTSB said. Despite this, the agency said Zobayan was not pressured to conduct the flight by neither Island Express nor his client.

The helicopter involved in the crash was a Sikorsky S-76B owned and operated by Island Express. It was not equipped with a flight-data recorder nor a cockpit voice recorder, both of which were not required.

The agency disclosed that the engines were working at the time of impact and there appeared to be no mechanical issues with the chopper.

There were 184 aircraft crashes from 2010 to 2019 from spatial disorientation — 20 of them were fatal helicopter crashes, the NTSB said.

The crash has led to a slew of lawsuits including one from Vanessa Bryant in February 2020 against the pilot and the company that owned the helicopter for negligence and wrongful deaths. Families of the other victims have sued the helicopter company.

Island Express did not immediately respond to request for comment.