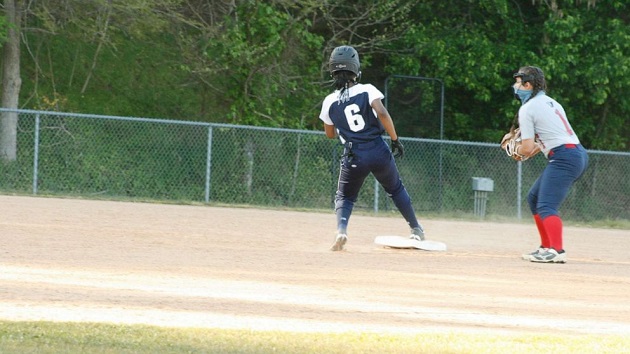 (DURHAM, N.C.) —  Nicole Pyles, a 16-year-old high school student from Durham, North Carolina, spoke with ABC News’ Zachary Kiesch after she was forced to cut her hair to continue playing in a softball game.

Pyles, a Black student who attends Hillside High School, said her team was in the lead during the second inning against a Jordan High School softball team on April 19 when an umpire told her he was unable to see her uniform number due to her hairstyle. She was wearing beaded braids during her team’s final home game of the season, a hairstyle she says she has worn in several games prior.

Pyles said she had tucked decorative braids into her shirt and sports bra initially, but after a second complaint, she said the umpire told her the hair beads violated the rules.

When given the choice to remove the beads or stop playing, Pyles said she was forced to cut her braids.

“I felt disrespected and I felt humiliated,” Pyles said.

“I truly felt like in my heart that it was not a choice … That’s my team, so I will stand by them no matter what,” she continued, adding, “Beads are not going to be the reason we don’t win a game.”

Pyles said she felt singled out following the second complaint.

“My hair means a lot to me … I’m not going to let braids take away from who I am on the field and off the field, but it is a part of me and no, I don’t want that to be stripped away from me,” Pyles added.

Dr. Karissa Niehoff, executive director of NFHS, told ABC News the rules are created to ensure sports participants are safe during the games.

“We want to make sure that if anything is in the hair, or on the head, it can fit snugly under a helmet so that the fit of the helmet isn’t compromised. The rule was never intended to address any kind of prohibition of a culture or ethnic group or even a hairstyle that might be most comfortable for a participant,” Neihoff said.

Que Tucker, commissioner for the North Carolina High School Athletic Association, which is a member of the NFHS and helps implement rules in high schools across the state, issued a statement on the incident on May 12, stating the rule against hair beads is not new.

“As a member of the NFHS, the NCHSAA follows all NFHS playing rules and regulations, including Softball rule 3-2-5 which states, ‘plastic visors, bandanas, and hair-beads are prohibited,” Tucker said in a statement.

“This is not a new rule, and when the violation was noticed by an umpire, the proper determination of illegal equipment was verified as supported by NFHS rule. Further, according to NFHS Softball Rule 3-5-1, before the start of a contest, it is the responsibility of each coach to verify to the plate umpire that all his or her players are legally equipped and that players and equipment are in compliance with all NFHS rules,” the statement continued.

“We empathize with the student-athlete and her experience. It is truly unfortunate, as we believe this situation should never have occurred. The NCHSAA expectation is that coaches will know the playing rules and ensure that their players are also aware of them prior to participating in any athletic contest,” Tucker said.

Neihoff said the incident could have been handled differently.

“When there’s a rule that might be of concern to a young person, there’s always a way to communicate … Perhaps even let the contest occur, then afterward, deal with the communication if there’s a misunderstanding or if there’s been inconsistency in rule application.” Neihoff said.

“It’s most unfortunate that her experience was one of the multiple games where it was okay, and now suddenly it’s not okay, and how that was communicated and then played out is just extremely unfortunate and that would never be our intention for that to happen,” Neihoff added.

Julius Pyles, the father of Nicole Pyles, told ABC News he does not believe the school district or the sports officials did enough to address the incident. He wants the Durham Public School District, the Jordan High School coaching staff and the NCHSAA to submit a formal written apology to his daughter and her teammates.

“When my child came home and I looked at her head, all it brought me back was memories of stuff that I said I never want my children to endure. And all the [school officials] are hiding behind is the damn rule, a rule that a white man comes up with” Julius Pyles said.

“I want the world to know how I feel as a Black man, and as a father that my child had to be ridiculed in order to play a simple game,” he said.

Tyler Whittenburg, chief counsel for the Southern Coalition for Social Justice, an organization representing the Pyles family, told ABC News that incidents like Nicole Pyles, where a student is seemingly singled out for distinct cultural or ethnic characteristics, can significantly impact self-confidence.

“This type of thing can discourage students from participating. It affects their sense of fairness and that type of trauma lasts with not just the individual, but with the family and with the community for years and years. So we really have to help to get not just that policy removed, but every policy that discriminates on Black hair to be removed so that this isn’t something that any student has to go through again,” Whittenburg said.

The NFHS Softball Rules Committee will meet from June 14 to June 16 for its annual assessment of its guidelines. Neihoff said the NFHS is looking at its rules to see how it can be more inclusive to reflect a more diverse body of student-athletes across the country.

“”We’ve become a learning organization we’re watching our kids become more diverse … So we’re having to really consider things that are within our rules with a new lens, and that one might be cultural, as we go through the rules considerations and change process. We hope that everyone involved in implementing a sports experience can implement rules but do so with some common sense, and a consideration for how rules might be communicated. We would never intend for a young person to be feeling anything in the way of humiliation, embarrassment, certainly, an affront to their culture or their race or their ethnicity, their religious background,” Neihoff said.

“As reflected in our school board’s unanimous resolution in support of the CROWN Act, (an acronym for Creating a Respectful and Open World for Natural hair, legislation banning hair discrimination) Durham Public Schools supports our students’ right to free expression and opposes unreasonable or biased restrictions on Black women’s hairstyles,” the statement read.

Durham Public Schools also said in its statement that it does not “prohibit beads in hair” and that “there was no involvement by any Jordan High staff member bringing the violation to the game officials’ attention. DPS supports our student-athletes and their right to self-expression in a manner befitting their culture, consistent with safety in training and competition.”

“We believe the blanket ban on hair beads is culturally biased and problematic. We support our student, Nicole Pyles, and believe this rule should be amended. We frown on any rule or policy that promotes cultural insensitivity or does not reflect the ideals and principles of DPS and our employees,” the statement continued.