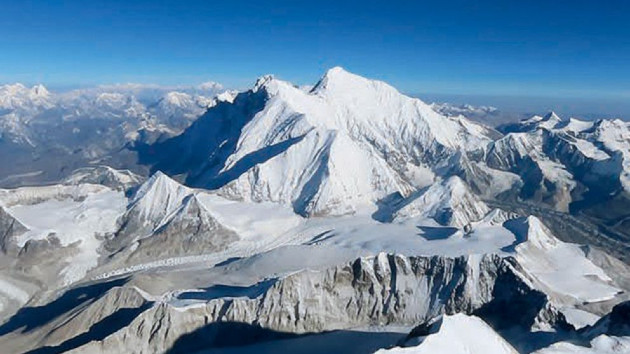 (NEW YORK) — When Nims Purja decided to try to obliterate the speed record for climbing the world’s tallest 14 mountains, he knew it wouldn’t be enough just to do it.

“I really wanted everybody in the world to witness this, to be part of this. The message there was to show the world that literally nothing is impossible,” he told ABC News.

So in addition to climbing in death zones and running on extremely limited funding, Purja started filming, utilizing GoPros and drones.

“I was flying the drone at the same time I was climbing,” the Nepalese mountaineer explained. “Yes, it’s very hard, it’s very tough, but if you really wanted to show this, if you really have the passion, you can do it.”

Two years later, the resulting footage made its way into a documentary, 14 Peaks: Nothing is Impossible, directed by Torquil Jones, which was released on Netflix at the end of 2021. In its first week on Netflix, it was in the top 10 films watched globally on the platform. A memoir, Beyond Possible, followed in early 2022.

So now, Purja gets to relive his epic achievement, this time with the world there to see it unfold.

In 2019, Purja, along with a team of Nepalese climbers, summited the 14 peaks in the world taller than 8,000 meters (more than 26,200 feet) across the Himalayan and Karakoram ranges in under seven months. The previous record was more than seven years.

Purja decided to do it in part because, well, he thought he could. As an elite Gurkha soldier and member of the U.K. Special Forces, he had an opportunity to tackle Everest as part of a celebration of 200 years of the Brigade of Gurkhas. When that trip was delayed, Purja tackled Everest anyways on his own. He went to Everest a second time with the military group, and then, he unintentionally broke speed records when he decided to take the opportunity to summit Everest, then Lhotse, then Makalu in quick succession.

Seeing how well his body performed at altitude, he wanted to see what else he could do. Purja first began climbing at altitude in 2012, at the age of 29, when he did the trek to Everest base camp with Nepali mountaineer Dorje Khatri, having grown up in Nepal and feeling the pull of it. After that, he began attempting higher climbs, which he did between his military service.

But you don’t make the sacrifices Purja did — giving up his military career and pension and mortgaging his house for funding — just to see if you can.

First, he said, he wanted to inspire the world, to show that “as a kid, you could have nothing — literally nothing — and you can be somebody, but that comes with super hard work, dedication, commitment, training harder.”

“But the second thing was, I really wanted to uplift the name of Nepalese climbers,” Purja told ABC News. “We are the heroes of 8,000-ers, but we never had that credibility, we are always in shadows, and now it’s time to give credit to this people, and I really felt that from the bottom of my heart.”

Much of the reporting and record-keeping among 8,000ers is limited to Western and non-Nepalese climbers, such as that New Zealander Edmund Hillary is often remembered for being the first to summit Everest — and had a portion of the mountain named after him — while he did it with Nepali mountaineer Tenzing Norgay.

Even in the midst of this historic feat, Purja felt instances of being erased as a Nepalese mountaineer. Purja and his team, which changed slightly between each mountain, didn’t just summit and leave. They also set lines, inspired base camps and worked to save strangers in trouble at altitude.

In at least one instance, he told ABC News, he and his team didn’t feel rightfully acknowledged for how they helped another team summit.

That’s part of the reason why he is so pleased with the success of the film and, now, the book, and he wishes that people who have enjoyed either “please raise the awareness, help us make the noise, spread this thing.”

In addition to that emotional impact, Purja was dealing with the worsening health of his mother, who plays a core role in the story. The physical climbing, he said, was the “easiest part” of the endeavor.

“The big hard thing was raising the funding at the same time, managing the social media, managing the team dynamics, the logistics, filming at the same point, dealing with the mental and health issues that you get from your loved one almost being close to the death,” he said.

It’s all these factors combined that make the record climbs such an extraordinary success, and Purja’s relentlessly can-do attitude — which comes through in the film, the book and even on Zoom — is infectious. He hopes it inspires you, and if you’re interested in mountaineering, he said, just try it.

“A lot of people think you have to be a super, super athlete to go and climb this mountain. Not really. Because you could be the fittest guy in sea level, but at altitude, it’s completely different. The best thing is, you wouldn’t know without trying,” he said. “And what you will learn from that is it’s a very slow walk.”

He advised, “Take time to go up, enjoy the nature, suck it in, take time to take pictures — that’s a good excuse to have a break — and then, honestly, you will love it. Because nature always puts things into perspective.”

And really, his message doesn’t just apply to summiting the world’s biggest, most daunting mountains — it applies to anything someone might think is too hard, too ambitious, too audacious, too much.