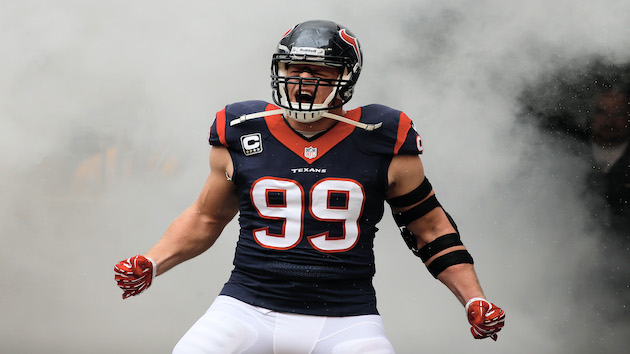 (NEW YORK) — NFL star JJ Watt announced on Twitter that he is signing with the Arizona Cardinals.

ESPN’s Adam Schefter reports the deal is two-years and is worth $31 million with $23 million guaranteed.

Watt asked for his release from the Houston Texans in February and the team granted him it on February 12.

He announced the release in a video on Twitter.

Houston, I wanted you to hear this directly from me… pic.twitter.com/YqT3P6Lb6l

Watt was drafted 11th overall by the Texans in 2011 and won three NFL Defensive Player of the Year awards between 2012-2015. He is one of only three players to win the award three times.

He is a five-time Pro-Bowler and five-time All-Pro and finished with 101 sacks in his Houston career, the most in franchise history.

Watt has dealt with several injuries since 2015, only playing in all 16 games twice since that season.

In 2016, he played in just three games before undergoing season-ending back surgery.

Arizona now has a formidable duo on the defensive line. Watt joins Chandler Jones, who leads the league in sacks since 2012 with 97. Watt is second with 95.5.

He also rejoins former Texans teammate DeAndre Hopkins, who was traded to Arizona in 2020.