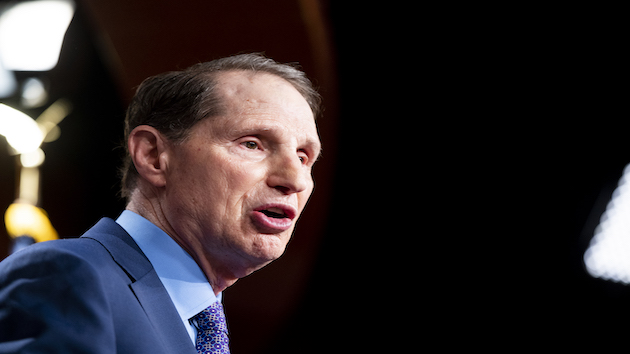 (NEW YORK) — A powerful lawmaker says efforts by the NFL to address alleged racial bias in its concussion settlement program are falling short of what is owed to Black former players.

In comments sent to the office of Sen. Ron Wyden (D-Ore.) on June 28, league officials outlined their plan to reevaluate claims for compensation that may have been affected by a race-based formula sometimes used to measure cognitive impairment, which critics say has skewed payouts along racial lines.

Wyden told ABC News that while the league’s current stance appears to represent “an improvement” from its previous position, much more transparency is needed.

“The NFL has a steep hill to climb to make amends for its racist policies that denied Black former players benefits they were owed and to give some straight answers about how the policy was implemented in the first place,” Wyden said in a statement. “It is unacceptable that the league refuses to reveal how many players were denied benefits as a result of its race-based formula.”

The NFL is currently locked in confidential negotiations with attorneys for former players, after the federal judge overseeing the program ordered them into mediation to “address the concerns” about its use of race-norming, a controversial practice used in medicine and some other fields that’s coming under increased scrutiny following an ABC News investigation earlier this year.

On Friday night, as an NFL spokesperson was preparing a response to questions from ABC News, the magistrate judge overseeing the mediation ordered that “the parties and counsel are not to discuss with persons not authorized to participate in the mediation either proposed settlement terms or the status of negotiations while the mediation discussions are ongoing.”

On Saturday morning, the league’s spokesperson issued a brief statement referring to that order.

“The Judge overseeing the mediation has directed the parties not to discuss the mediation process, and the NFL is abiding by that Order,” said Brian McCarthy, the NFL’s vice president of communications. “While the NFL did not create race norms, it is committed to prohibiting their use in Settlement Program evaluations and ensuring that any claimant whose claim was denied as a result of race norms will have their testing re-scored.”

“As to the assertion that the NFL has employed racist policies, race norms were administered by independent clinicians in the Settlement Program — not the NFL — and were widely accepted and used in standard clinical neuropsychological practice at the time that the Settlement Agreement was implemented,” McCarthy added.

In February, ABC News uncovered emails between clinicians who evaluated former NFL players for compensation through the program, in which they contended they were all but required to apply race-based adjustments to players’ cognitive test scores and expressed concerns that the league’s protocols discriminate against Black players.

And a data analysis from a law firm representing several players, also obtained by ABC News, suggests that the impact of the practice on payouts could be significant, making it much more difficult for Black players to qualify.

A new deal has yet to be reached, but both parties have signaled that they will seek to eliminate race as a factor in future evaluations. Significant questions remain, however, about how to address past claims — from former players for whom race was a factor in their denials, as well as from former players who never submitted claims because they were told they were not impaired enough to qualify.

NFL officials told Wyden’s office that re-scoring of previously submitted claims would be left to the discretion of the claims administrator.

“The Parties anticipate that the ultimate implementation of a revised methodology will not require much, if any, action by Retired Players,” wrote Brendon Plack, the league’s senior vice president for public policy and government affairs. “The neutral Claims Administrator will re-review Claim Packages submitted through the Monetary Award Fund (‘MAF’) program or Baseline Assessment (‘BAP’) program to determine whether any claim needs to be re-scored under the new methodology, and will notify affected Retired Players about its findings, their rights and next steps.”

Players who have been previously tested but never submitted a claim, league officials said, would have to be re-tested under the new protocols and then seek a “backdated diagnosis.”

“All Retired Players, including those who have been previously evaluated through the MAF program but have not yet submitted a claim, may be re-examined by a Qualified MAF Physician or undergo a BAP evaluation (if eligible) at any time for a neurocognitive impairment assessment,” Plack wrote. “If a Qualifying Diagnosis is rendered, the Retired Player may submit a Claim Package based on that assessment. … If it is determined that a Retired Player underwent a prior evaluation and met the criteria for a Qualifying Diagnosis earlier than the date of the new evaluation, the Retired Player is eligible to receive a Monetary Award calculated as of the earlier date.”

Christopher Seeger, the attorney representing former NFL players in the mediation, however, disputed any notion that “the parties” had resolved their differences on that issue.

“The NFL does not speak for me or the retired NFL player class, and their response to Senator Wyden does not reflect our position,” Seeger said in a statement issued prior to the judge’s order. “At this point, the only agreement we have with the NFL is to eliminate the use of ‘race norms’ in the claims process going forward. No agreement has been reached on rescoring previously submitted claims, and the NFL’s response to Senator Wyden misrepresents our position. We believe all claims should be rescored if a neuropsychologist applied ‘race norms’, and if this is not achieved as part of the mediation, we will seek relief from the court.”

The league’s position would appear to fall short of Seeger’s previous demands for a more exhaustive reevaluation of claims submitted under the program. In an exclusive interview with ABC News, which was featured in a special edition of “Nightline” in June, he said that he will not sign off on a new agreement unless it includes two specific provisions.

“For me, the only two outcomes here, without a massive war, is elimination of race norms and the ability to go back and look at every claim, every single claim, to determine where it’s been applied,” Seeger said. “And if it has to be rescored and then compensated, so be it.”

Attorney Cy Smith, who represents Kevin Henry and Najeh Davenport, the Black former players who petitioned to intervene in the mediation, also said the NFL’s discussion of the potential terms of a new agreement is premature.

“All parties to the ongoing mediation agreed to keep those discussions confidential, pursuant to instructions from the Court and at the NFL’s insistence,” Smith said in a statement that was also issued prior to the judge’s order. “Because no agreement has been reached, and those negotiations are continuing under Court supervision, it is surprising and frankly inappropriate for the NFL to suggest that an agreement has been struck, or what the terms might be. Accordingly, we will have no comment at this time.”

Sen. Wyden, meanwhile, will be waiting to review the terms of the final agreement.

“Regardless of the NFL’s public statements,” Wyden said, “the proof will be in the ultimate results of the mediation process.”