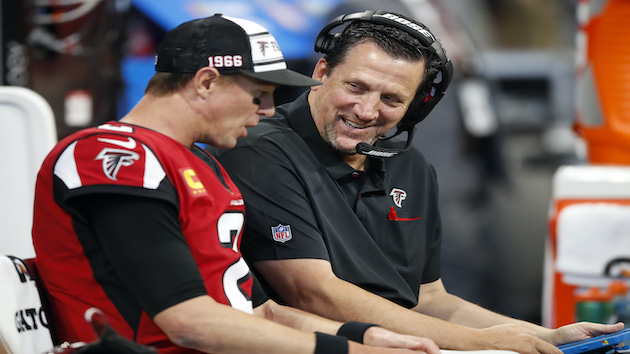 NEW YORK) — New York Jets assistant coach and passing game coordinator Greg Knapp has died after being struck by a car while riding his bicycle in California on Tuesday, the team announced Tuesday.

“Today at 11:32 am PST, Greg Knapp (aka Knapper) was called back home to Heaven, where he will be reunited with his Dad,” the team said in a statement.

Knapp was struck by a car on Tuesday and never regained consciousness, according to the team.

“Those of us who were so blessed to have known him, know that he would have wanted even this moment to be a teachable one. So this is it…”Live every day as if it’s your last, and love those around you like it won’t last!” the statement said. “Greg’s infectious personality is most people’s first and lasting memory of him. The phrase “He never met a stranger” encapsulates Knapper’s zest for life. He had a unique gift to make everyone feel special, and to Knapper, they all were.”

Knapp was struck at 2:49 PM local time on Tuesday and based on preliminary investigation drugs/alcohol were not involved, San Ramon Police Department told ESPN. The driver, whose name is being withheld, is cooperating.

It happened at an intersection about 27 miles east of Oakland, according to ESPN.

The Jets rookies will arrive at training camp on Tuesday with veterans starting on July 27.

This season would have been Knapp’s 26th as an NFL coach. He has spent the past 22 years as either an offensive coordinator or quarterbacks coach.

According to ESPN, Knapp was hired to work with Jets rookie quarterback Zach Wilson.

Before joining the Jets, Knapp was the quarterback coach in Atlanta for three seasons. During his time in Atlanta, Matt Ryan threw for 13,971 yards, the most in the league, and 87 touchdowns.