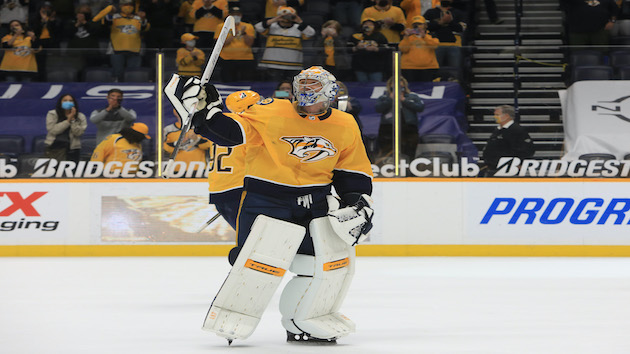 (NASHVILLE, Tenn.) — Nashville Predators goalie Pekka Rinne has announced his retirement from the NHL after 15 seasons with the team.

“For more than 15 years, I’ve been on an incredible, life-changing journey with the Nashville Predators that has taken me to more places than I could have ever imagined and given me more than I could ever hope to give back,” Rinne said in a statement.

In NHL history, he is ranked 19 for both wins and shut-outs.

In Finish history, he leads all NHL goaltenders with wins and shut-outs.

“For years, Pekka has been the face of our franchise on and off the ice,” Predators President of Hockey Operations/General Manager David Poile said in a statement. “The role he played in making the Predators organization into something so much more than just a hockey team cannot be understated, and what he means to our team and community makes him one of the most special players and people you’ll ever meet. It’s cliché of what you would want from your best players, but Pekka gave us a chance to win in every single game he played and led our team during the most competitive era of our franchise.”

Rinne was drafted 258 overall in the 2004 NHL Entry Draft and made his league debut with a win against Chicago in December 2005. He became the starting goalie in the 2008-2009 season and finished fourth in the Calder Cup, the NHL’s rookie of the year award.

Rinne led the NHL in shutouts, second in wins and third in games played for the next 13 years

During the 2010-2011 season, Nashville won its first-ever NHL playoff series with Rinne backstopping them past Anaheim.

The next season, Rinne led the league with 43 wins, the first of three 40 win season’s in his career.

In 2017, he led the Predators to the Stanley Cup Final against Pittsburgh, losing 4-2. Rinne topped his single postseason Nashville records with 14 wins, two shutouts, and a 1.96 goals-against average.

The following year, Rinne won his first Vezina Award, given to the top goaltender in the league, after leading the league with eight shutouts and a .927 save percentage. He was a finalist for the award three other times.

This past season, he went 10-12-1 in 24 appearances and posted a shutout in the final game of his career. In June, he won the Bill Masterson Memorial Trophy, given to the “player who best exemplifies leadership qualities on and off the ice and has made a noteworthy humanitarian contribution in his community.”