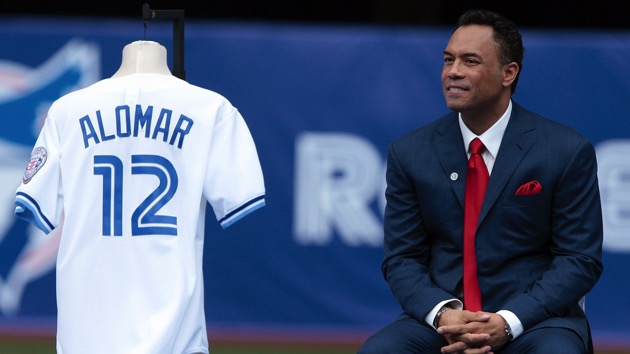 (NEW YORK) — Major League Baseball has placed Hall of Famer Roberto Alomar on its Ineligible List and terminated its consulting contract with the former second baseman.

According to a statement from MLB Commissioner Rob Manfred, the decision comes after an independent investigation by an external law firm regarding an allegation of sexual misconduct reported earlier this year. The allegation is regarding an incident from 2014.

Manfred said that after reviewing the now-completed investigation, he “concluded that Mr. Alomar violated MLB’s policies.”

“We are grateful for the courage of the individual who came forward,” Manfred continued. “MLB will continue to strive to create environments in which people feel comfortable speaking up without fear of recrimination, retaliation, or exclusion.”

The Toronto Blue Jays also severed ties with Alomar, who had been working as a special advisor to the organization.

Alomar played for Toronto from 1991 to 1995, winning two World Series titles. The team said Friday that it will remove a banner honoring Alomar, as well as other acknowledgements of his career. The Blue Jays had retired Alomar’s number 12 in 2011.

In his own statement, Alomar said he is “disappointed, surprised, and upset” by the decision.

“With the current social climate, I understand why Major League Baseball has taken the position they have,” Alomar says. “My hope is that this allegation can be heard in a venue that will allow me to address the accusation directly.”

The National Baseball Hall of Fame, to which Alomar was inducted in 2011, said his enshrinement will remain in place.

“When he was elected to the Hall of Fame by the Baseball Writers’ Association of America in the Class of 2011,” Hall of Fame Chairman Jane Forbes Clark said, “Alomar was an eligible candidate in good standing. His plaque will remain on display in the Hall of Fame in recognition of his accomplishments in the game, and his enshrinement reflects his eligibility and the perspective of the BBWAA voters at that time.”

And an investigation remains ongoing into accusations against Los Angeles Angels pitching coach Mickey Callaway, formerly the Mets’ manager, who is currently on administrative leave.