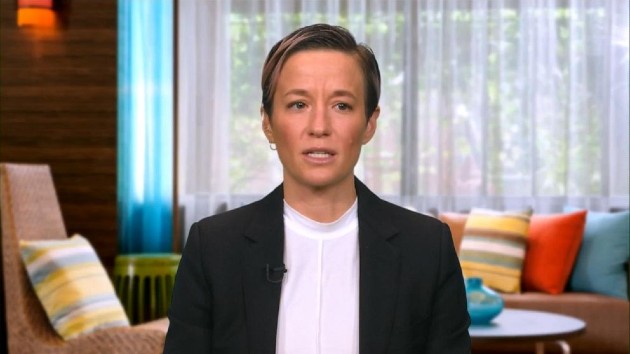 (NEW YORK) — Soccer star Megan Rapinoe will testify before the House Oversight Committee on Wednesday in a hearing focused on pay inequities between men and women — and the proposals Democrats have put forward to close the gender pay gap.

The U.S. women’s soccer team captain, who also plays for the OL Reign of the National Women’s Soccer League, has long advocated for equal pay for female athletes, and used the national team’s World Cup run and victory to draw attention to the unequal distribution of prize money and resources between the men’s and women’s tournaments and national teams.

Rapinoe and other members of the women’s national soccer team recently agreed to settle part of their lawsuit against the U.S. Soccer Federation over claims of unequal working conditions, but are still appealing a decision on wage discriminations under the Equal Pay Act, according to ESPN.

“I feel like I pull on this shirt for equal pay and for the fans and for kids who want to be in my position,” she recently told ESPN. “So that never feels in conflict.”

Committee Chair Carolyn Maloney, D-N.Y., said the hearing would focus on disparities that have been exacerbated by the coronavirus pandemic.

“Women without access to paid leave have been forced to decide whether to forego income or step back from their professions in order to care for themselves or their loved ones,” she said in opening remarks obtained by ABC News.

The hearing, set to take place on Equal Pay Day, comes as the NCAA faces backlash for the sparse weight room provided to women’s basketball players for the March Madness tournament, compared to the facilities set aside for the men’s teams. The NCAA also provided different types of COVID-19 tests for the two tournaments, a decision that has been criticized by coaches and student athletes.

The NCAA apologized for the weight room disparities on Friday and upgraded the women’s facility over the weekend.