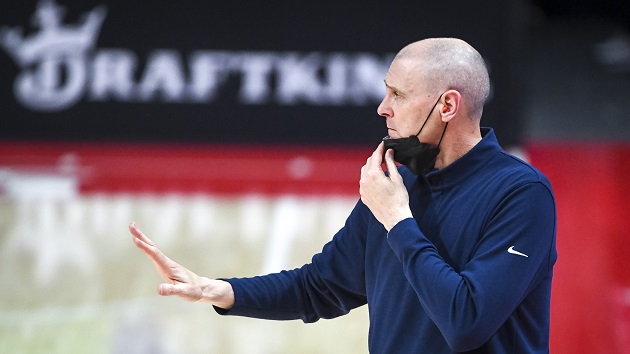 (DALLAS) — Dallas Mavericks head coach Rick Carlisle has informed owner Mark Cuban that he will not be returning to coach the team next season, according to ESPN’s Adrian Wojnarowski.

Carlisle had spent 13 years as the head coach of the Mavericks, coaching them to an NBA title in 2011 against the Lebron James and the Miami Heat. Carlisle had 2 years left on his contract.

Carlisle held the Mavericks’ record for most wins by a head coach with 555.

Carlisle had been with the Mavericks since 2008-09, tied for the 2nd-longest active tenured head coach with a single franchise.

He won a franchise-record 555 games as Mavericks head coach, including the team’s lone championship in 2011. https://t.co/FDlOeaF9nV

“Rick informed me today [Thursday] about his decision to step down as head coach,” said Cuban in a statement. “On top of being a tremendous basketball coach, he was also a friend and a confidant.”

“Rick helped us bring the O’Brien Trophy to Dallas and those are memories I will always cherish,” he added. “I want to thank Rick for all he gave this franchise and this city. We wish him all the best.”

The Dallas Mavericks announced today that Rick Carlisle has stepped down as head coach. pic.twitter.com/vaRYbRuyDs

It’s the second high-profile departure in recent days for the Mavericks, after General Manager Donnie Nelson was fired earlier this week. That came after sources told ESPN that there Nelson was unhappy with the growing role in the front office of the team’s director of quantitative research and development Haralabos Voulgaris.

Nelson had worked 24 seasons with the team and was credited with scouting two of the best players in franchise history: Dirk Nowitzki and current star player, Luka Doncic.

Doncic spoke about Nelson’s departure during a media availability for the Slovenian national team Wednesday.

“It was kind of tough to me,” Doncic said. “I really like Donnie. I know him since I was a kid and he was the on that drafted me.”

“It was tough for me seeing that, but I’m not the one making decisions here,” Doncic added.