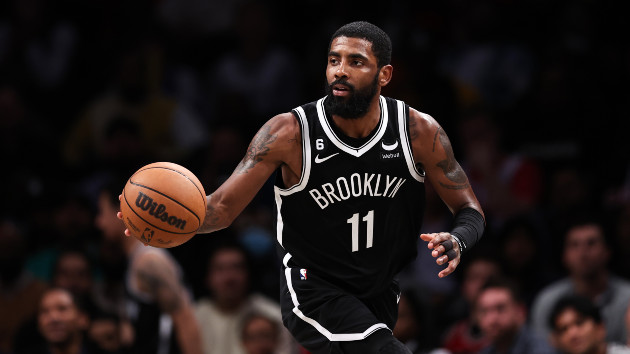 (NEW YORK) — The Brooklyn Nets and their all-star point guard Kyrie Irving have announced that each of them will donate $500,000 to the Anti-Defamation League after Irving tweeted a link to a film that critics say promotes antisemitic tropes.

“The events of the past week have sparked many emotions within the Nets organization, our Brooklyn community, and the nation,” the joint statement between the two parties read. “The public discourse that followed has brought greater awareness to the challenges we face as a society when it comes to combating hate and hate speech. We are ready to take on this challenge and we recognize that this is a unique moment to make a lasting impact.”

“To promote education within our community, Kyrie Irving and the Brooklyn Nets will each donate $500,000 toward causes and organizations that work to eradicate hate and intolerance in our communities,” the statement continued. “The Nets and Kyrie Irving will work with ADL (the Anti-Defamation League), a nonprofit organization devoted to fighting antisemitism and all types of hate that undermine justice and fair treatment for every individual. This is an effort to develop educational programming that is inclusive and will comprehensively combat all forms of antisemitism and bigotry.”

Last Thursday, Irving tweeted a link to the 2018 movie Hebrews to Negroes: Wake Up Black America on Amazon Prime Video. The synopsis states that the film, based on a 2015 book of the same name, “uncovers the true identity of the Children of Israel.” Several Jewish rights organizations, including the American Jewish Congress and the Anti-Defamation League, have denounced the film as antisemitic.

In the latest statement released by Kyrie Irving and the Brooklyn Nets, Irving maintained that he never meant to hurt anyone.

“I oppose all forms of hatred and oppression and stand strong with communities that are marginalized and impacted every day,” said Kyrie Irving. “I am aware of the negative impact of my post towards the Jewish community and I take responsibility. I do not believe everything said in the documentary was true or reflects my morals and principles. I am a human being learning from all walks of life and I intend to do so with an open mind and a willingness to listen. So from my family and I, we meant no harm to any one group, race or religion of people, and wish to only be a beacon of truth and light.”

The Nets and the NBA had previously released statements maintaining their intolerance for antisemitism and any form of hate speech.

Nets owner Joe Tsai said in a tweet Saturday he wants to “sit down” with Irving and ensure he understands “it is wrong to promote hate based on race, ethnicity or religion.”

The NBA similarly said it intends to continue working with all members of the NBA community to “ensure that everyone understands the impact of their words and actions.”

However, former athletes and Jewish leaders argue the team and the league need to go a step further, calling for them to hold Irving accountable through disciplinary measures.

“I think that the Nets should have suspended him,” Jack Rosen, president of the American Jewish Congress, told ABC News. “They’re part of the problem, and they need to take action.”

Representatives for Irving, the NBA and Brooklyn Nets did not immediately respond to ABC News’ requests for comments.

Then-Sacramento Kings guard Rajon Rondo was suspended in 2015 after directing an anti-gay slur at an NBA referee. Last year, the Miami Heat’s Meyers Leonard received a $50,000 fine and was suspended for one week after making an anti-Semitic slur during a livestream while playing video games.

Irving’s teammate Kevin Durant was also fined last year for his use of homophobic and misogynistic language in Twitter messages to actor Michael Rapaport.

“We’ve suspended people and fined people who have made homophobic slurs. And that was the right thing to do. If you insult the Black community, you should be suspended or fined heavily,” Barkley said on TNT’s Inside the NBA.

“When you’re somebody as great at basketball as him, people are going to listen to what you say. I blame the NBA, he should have been suspended,” Barkley added.

Asked why Irving hasn’t been disciplined for his tweet, Nets general manager Sean Marks told reporters: “I think we are having these discussions behind the scenes. I honestly don’t want to really get into those right now…Really just trying to weigh out exactly what the best course of action is here.”

The Anti-Defamation League, a New York-based Jewish civil rights organization, initially applauded the NBA and the Nets via Twitter “for responding quickly to condemn the promotion of #antisemitic hate speech.”

ADL CEO and National Director Jonathan Greenblatt, who has been in ongoing conversations with the NBA, said he is looking forward to engaging Irving more on the matter.

“I think its more ignorance, not intention. But that doesn’t diminish his accountability,” Greenblatt told ABC News. “We need an ongoing process of discussion and dialogue. And I’m hoping that will happen.”

Irving has since deleted his original tweet but until the latest statement, defended his right to share the link to the documentary.

“I’m not going to stand down on anything I believe in,” Irving said during Saturday’s postgame press conference “I’m only going to get stronger because I’m not alone. I have a whole army around me.”

He noted that he is “not a divisive person when it comes to religion” and embraces “all walks of life.”

“Did I do anything illegal? Did I hurt anybody?” he added. “Did I harm anybody? Am I going out and saying that I hate one specific group of people?”

He confirmed he watched the film but denied endorsing it and said he shared the link after finding the movie during an internet search.