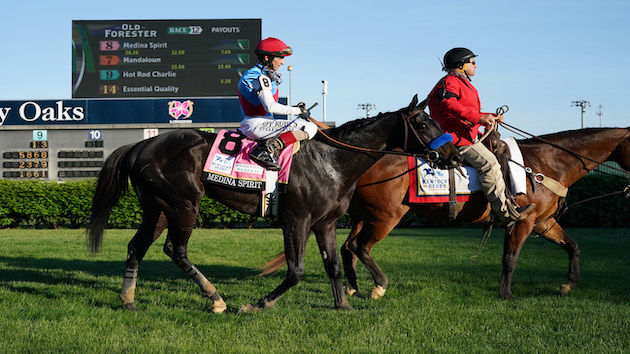 Bob Baffert, a Hall of Fame trainer, announced in a press conference at Churchill Downs Sunday that the horse failed a post-race drug test.

Medina Spirit was found to have 21 picograms of the steroid betamethasone, which is double the legal limit in Kentucky racing, Baffert said.

On May 1, Medina Spirit won the Kentucky Derby by a half-length. Baffert’s team learned of the positive result from Kentucky officials on Saturday, he said.

The win gave Baffert his seventh victory, a record for the race.

He described the test result as a “complete injustice,” saying Medina Spirit had never been treated with betamethasone, a joint injection/anti-inflammatory medication, and that he did not know how the horse could have tested positive.

“I got the biggest gut-punch in racing, for something I didn’t do,” he said.

Medina Spirit has not been officially disqualified, but that could still happen once more tests are complete, Baffert said.

Baffert vowed to be transparent throughout the investigation but added that his team will conduct their own investigation.