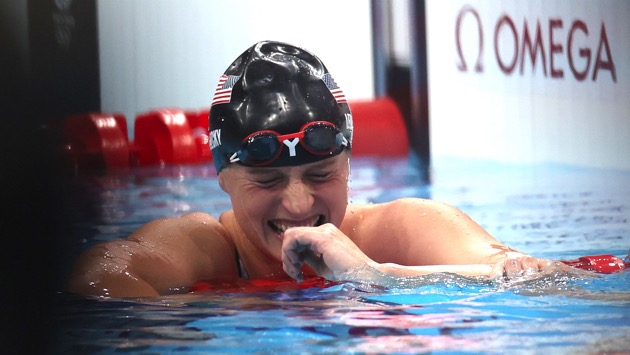 (TOKYO) — American Katie Ledecky further cemented her name in swim history with a gold medal in the 1,500-meter freestyle, a race that made its Olympic debut in Tokyo.

The 1,500-meter freestyle had previously only been available to men at the Olympics. But this year, as the Games became more gender-equal, the distance race was opened up to women.

In a post-race interview on NBC, Ledecky said she knew this race “was going to be tough,” especially because she had swum in the 200-meter freestyle final about an hour earlier, but pushed herself through.

“I just think of all the great female swimmers the U.S. has had,” Ledecky said of the opportunity to make swim history with the 1500-meter race.

Ledecky was a favorite to win the race. During qualifiers Monday, she set the official Olympic record at 15:35:35. That was about 15 seconds slower than the world record — which she set in 2018.

The 24-year-old had already medaled once in Tokyo, winning the silver in the 400-meter freestyle. Australian Ariarne Titmus took home that gold.

“I can’t be disappointed with that,” Ledecky said of that race, according to Team USA. “It was my second best swim ever, and I fought tooth and nail. That’s all you can ask for.”

As a distance freestyle swimmer, her bigger events are the 800- and 1,500-meter races.

The Olympics have made the competition more gender-equal by incorporating new events for women and more mixed-gender teams in various sports. This impacts athletes in sports like boxing, rowing and shooting, in addition to swim.

Tokyo marks a “turning point” for the elite international sporting competition as the most gender-equal Olympics in the Games’ history, organizers said, with women accounting for nearly 49% of the 11,090 athletes.