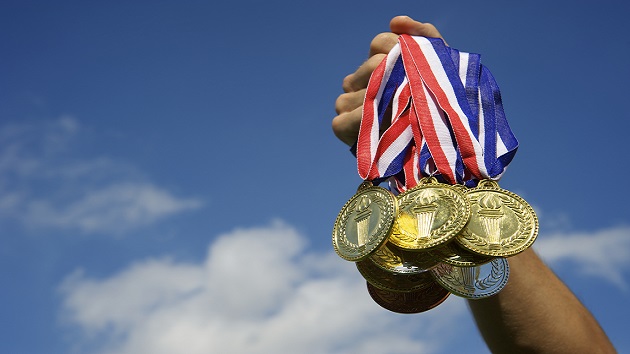 (TOKYO) — Up until last year, the Olympic games had never been postponed for any other reason than a world war. Then the coronavirus pandemic swept across the world, putting the dreams of over 10,000 Olympic hopefuls on pause.

The Summer Olympics in Tokyo are now set to begin in less than two weeks, nearly 500 days after the International Olympics Committee announced the postponement of the Games on March 24, 2020.

After a year of extraordinary planning, the Tokyo Olympics will be different than any other Olympics Games before it: As the worldwide vaccination effort against COVID-19 continues, all spectators will be banned from attending the Games, the athletes will be isolated from one another, and all coaches, trainers and participants will be tested rigorously for COVID-19.

After going through what they called unprecedented training, three athletes spoke to ABC News about what it took for them to get to the Olympic stage while a global pandemic ravaged the world.

Two-time Olympic gold medalist Lilly King was a breakout star at the Rio de Janeiro Summer Olympics in 2016 when she won first place in the 100-meter and 200-meter breaststroke. When she heard the postponement news, King said she was at home training in Evansville, Indiana — it was just one of many training sessions she’d had over the previous months. Yet still, she said the reality of the situation didn’t sink in until some time later.

“I heard the Olympics were postponed and I didn’t really know what to think. I’m kind of … a serial under-reactor,” King told ABC News. “[Five months later], my mom actually got my Olympic flag framed from 2016… I saw the flag and that was kind of the moment, I was like, ‘Oh, my God, we’re not going right now. This is not fun.’”

“[I had] my little meltdown that I had been waiting to have for five months… I got it out eventually and I think that was good,” she added.

In April 2020, King was forced to adapt her training routine to a world in which pools were closed due to COVID-19.

“I was sitting at home one day and my coach called me and said, ’Do you have a wetsuit?’” King said. She told him she didn’t. “He said, ‘Well, you better get one because we’re gonna swim in a pond.’ It was probably mid-April, but we started swimming in the pond in Indiana. It was freezing.”

King said she and her teammates bonded over the brutally cold days in the pond and the long drives across the state to access the few pools that had begun to reopen.

“If one of us came to practice with a bad attitude one day, it would ruin the rest of it for the other nine of us. … You had to be really conscious about what you were saying out loud, or what you were thinking, because it was very noticeable to the people we were training with since we are a small group,” said King.

King said that with her previous Olympics experience, she has looked forward to the Tokyo Games as a chance to step into a role as a leader and mentor to her teammates, many of whom are young.

“Having a long career in this sport is just having a good outlook and a good attitude about things and that’s what I tried to do,” said King. “It is the Olympics, but in the end it’s just another swim meet. Hopefully that’ll be helpful to those younger athletes and I know that would have been very helpful advice to me whenI was in their shoes.”

Hungry to compete, King said that the yearlong wait will only make competing at the Olympic Games that much sweeter.

“We still have an incredible team here and they’re ready to compete and ready to go,” said King. “Hopefully I can be that mentor that I had to those younger kids on the team and just come out and swim fast and have fun.”

In March 2019, professional skateboarder Mariah Duran was named one of 16 inaugural members comprising the USA Skateboarding National Team in the first Olympics Games to ever feature the sport.

Two years later, she is the leading female skateboarder in the U.S. and will compete against 26 nations in her Olympic debut.

“It was big to just be a part of [the Olympics] and work towards something and to have that extra goal set in front of me as a skater,” said Duran.

“It’s going to make the conversation for younger girls who want to pick up a board, their parents might be more down to let them do it,” she added.

After a whirlwind 2019 during which she competed in qualification rounds and traveled, Duran said she used the extra time from postponement to reconnect with her love for skating.

“[This year], I would have to say I really fell in love with skateboarding even more, and that aspect of when all this other noise is canceled, I still love skating and I would do it regardless of whether the Olympics happened or not,” Duran told ABC News. “I’ve been skating for about 14 years. So all those other years, I was just doing it because I love doing it.”

Duran, who is from Albuquerque, New Mexico, said she used the city as a training ground by finding outdoor parks, stairs, ledges and other obstacles in town.

“I just want longevity in the sport. So what can I do to create that? I was able to get two trainers [to focus my training] and we would do Zoom calls. … I would have [the weekend] just to myself and skate all day if I wanted to,” she said.

Along with practicing yoga regularly to help with her flexibility, Duran said she also used the postponement to slow down and focus on mental training, including being present in the moment.

“When you’re competing at such a high level, or you’re pushing yourself to do such an extreme [trick]… getting in tune with your mental space is so important because once you can control that. You can control the outcome if you know the position you put yourself in.”

Duran said she hopes that the game’s global spotlight on skateboarding will inspire other people, especially women, to get involved in the sport and continue to push their limits.

“Skating is so empowering and amazing that, when you step on a board, you don’t feel like a girl or a boy. At that point, you’re just a skater,” said Duran. “I really hope that people just look into the sport a little bit more and it sheds a light and it helps grow the sport.”

Two-time Paralympian David Brown runs in the 100-meter and 200-meter sprint alongside a sighted guide in the T11 sports class, which includes all athletes who have a visual field of less than 10 degrees diameter. Brown said the past year has helped him to grow more in tune with his own body as an individual runner — one who doesn’t necessarily need help.

“What inspired me to actually start running was me starting to go blind when I was 6-years-old. … I started being able to just run fast,” Brown told ABC News. “Even though I am blind, I’m not going to let you take advantage of me. If you’re going to beat me, you’re going to have to work for it and it doesn’t matter if I can see or not.”

Since 2014, Brown has held the world record as the fastest totally blind athlete in the world.

Brown, who began competing in the Paralympics in 2012 and secured a gold medal in the 2016 Rio de Janeiro games, said that the extra time that he spent training last year gave him the chance to better understand his muscles, timing and pace.

Brown said that training by himself allowed him to focus inward and find his own step rather than sync his stride to another person’s.

“I’ve been running for some years now, but I never knew the technicality of sprinting. … Especially when it comes to running with someone else,” said Brown. “Sometimes, not knowing what to do or how to do certain things, you end up molding yourself to the runner that you’re running with.”

The Paralympic games begin on Aug. 24, 2021 in Tokyo. In a year filled with novel protocols and critical improvisions, Brown said he’s ready for whatever happens.

“At the end of the day, we’re not going to leave anything on the table,” he said. “The fact of the matter is, I made it here, I made it this far, which is a huge blessing and a huge accomplishment in itself.”

Brown said his goal is to inspire future athletes to test the limits of their own abilities.

“That’s what it’s all about, giving inspiration to the future athletes,” he said. “And then showing the ones that come after us what is possible.”